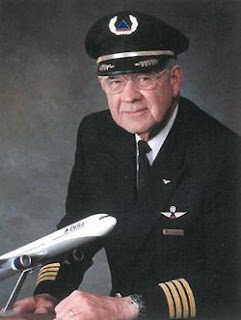 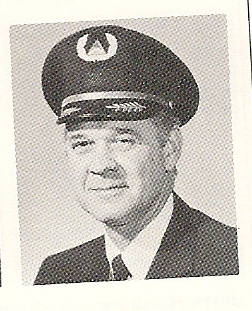 Word has been received of the passing of Air Force veteran, retired DL
pilot and Delta Golden Wings member Captain L. M. ‘Milt’ McKnight. Born December 26, 1941 Lloyd Milton McKnight was 70 years of age at the time of his passing January 27, 2012. Milt hired on with Delta 03-14-1969 and retired at the mandatory age 60 with 32+ years of service, based ATL Dept. 030. Lloyd Milton McKnight and Louise Jeannette Hackney were married in Florida May 14, 1977. Milt is survived by his wife Lou Jean.

I have not been able to find an obituary to date, but I did find this very nice online tribute written by a friend and wanted to share it with you. As you can see by Milt’s updates below, Milt had been fighting the good fight for a very long time.


For those wishing to send personal condolences to the family,

the McKnight’s home address is

I remember the first time I met Lloyd Milton McKnight, who my good
friend always referred to as Uncle Milt — he was, in fact, my friend’s
uncle.

Uncle Milt was, simply, one of the best people I’ve ever known.

Milt died Friday after a long battle with cancer. He was 70. When I
received a text message at a bar Friday night, I had to read it a few
times to believe it.

Uncle Milt had a certain indestructibility about him. Strong-minded,
Southern, military men who just happen to be competitive shooters
often do. When I found out he had cancer a few years back, I just
assumed he’d beat it.

Milt was a man’s man. He served his country in the Air Force and then
flew jet airliners for Delta when only real men earned their pilot
wings. He had been retired for a few years, living in a pond-bordered
home that Southern Living should feature when I first met him in 2008.
My friend and I were going to a NASCAR race at Atlanta Motor Speedway,
and he and his wife lived about 15 minutes from the track.

Airplanes turned out to be my in with Milt. He had models in his man
cave, a finished basement with a big screen TV, a bar and an armory,
of every jet he ever flew.

I didn’t know anything about guns, but I knew planes from my days of
rooming with some pilots in college. Milt seemed impressed, and the
stories soon followed.

Uncle Milt could make you remember to use your “sirs” and “ma’ams”
without saying a word. You wouldn’t just avoid swearing in front of
him; you’d want to use proper English. He wore glasses and typically
kept a gun within arm’s length.

But Milt had a beauty about him that was magnetic. When I got to hang
out with him, I was hanging out with the man I want to be when I grow
up.

The way he called his wife by her proper name (Lujean) always made me
smile. His stories were genuinely interesting. He could explain
something as complex as making ammunition and make you feel like you
learned something.

I learned a lot from Milt during those race trips. He showed me how to
properly fire a handgun with hot action and the subtle differences
between Boeing 757s and 767s. He’d listen to every word of my long-
winded racing stories and opinions while Jean made us chili.

I can’t remember if Milt was a Dale Earnhardt fan or not, but I think
they’d get along great.

I imagine they are now.

My prayers go out to his wife and family.

This entry was posted on January 29, 2012
JoeVanHoose.com Athens, GA
joe.vanhoose@gmail.com

As you may remember, my lung cancer returned last August. I went
through second line chemo cocktail for six months and as a result of
a
remarkably improved PET scan in late December, my oncologist put me
on
a maintenance chemo protocol. I get a treatment every 21 days. I feel
good, and really have no complaints except for the neuropathy caused
by the first round of chemo in '09. I will have another PET scan
later
this month to see how thing are going.. I appreciate your thoughts,
prayers and emails.


Please keep my wife, Lou Jean, in your prayers because as we were
going into the Fayette County Hospital for MY appointment last
Thursday (she always insists on going with me), she tripped and fell
on some paving tiles at the hospital entrance. ER visit x-rays
indicated fractured right wrist and possible torn right rotator cuff.
Will see the orthopedic doctor on Wednesday.

Our best to all of you, especially those of you who are going through
hardships of your own.

Just a short update. My cancer showed up again on a PET scan on
August 30th. The oncologist classed it as stage 4 since it has
migrated into the lymph glands. I started a second round of chemo on
the 30th of September and had my second dose last week. Side effects
(other than just feeling bad) have so far been minimal. Still trying
to work at the gun store but have had to cut back a little. My spirits
are good and one day His plan will be revealed, until then we do what
we can. My "right arm" of course is my wife Lou Jean, without whom I
could not have made it as far as I have.

Thanks again for all your prayers, thoughts and well-wishes.

First of all I would like to thank all of my prayer
partners. My God is a wonderful God and is everlasting.
I had 37 radiation treatments and 12 chemos.PET scan on Monday,18 Jan
- then wait four days for results. The results indicated the tumor is
dead and the scan was normal and lymph nodes clean. Now, with one
voice, Praise the Lord!
I go back for another CT scan in three months. No more chemo! We will
be working on the neuropathy using medication and acupuncture. I have
an appointment next Monday with the acupuncturist and will try next
week to start the process of trying to get some of my voice back.
Will try and keep you updated.
I also have to start exercising to see if I can regain some strength
after such a sedentary lifestyle over the past several months. My
thumbs are in good shape due to much use on the TV remote, so I won't
have to work on them.
I will have to tell you though that the results were not unexpected
because I have faith in my God. Had they been different, my faith
would have sustained me because God has a plan, and I have accepted
His will and His plan, whatever it may be.
Once again, Thank you all.

Lou Jean McKnight
Posted by Unknown at 3:34 AM