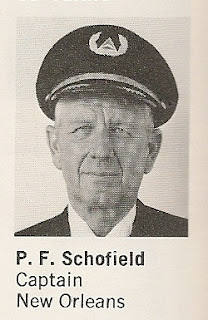 
PARKER F. SCHOFIELD Parker F. Schofield, 95, passed peacefully on to join his beloved wife of sixty five years, Nancy O. Schofield, on March 14, 2012. Captain Schofield flew for the Army Air Corps during World War II and retired in 1977 from a career as a pilot with Delta Airlines. He was one of those rare individuals skilled with his hands as well as his mind. During and following his airline career, Mr. Schofield ran a construction company in Massachusetts, worked as an attorney, and for two years, was Director of the UN International Civil Aviation Organization's training center in Beirut, Lebanon. He is survived by one son, one daughter, five grandchildren and five great-grandchildren, all of whom loved him dearly. "In times of doubt, Grandpa, we will sorely miss your wise counsel. We will forever cherish rich memories of your humor, your generosity, and your trademark random acts of kindness. Rest in Peace." To express condolences and/or make donations visit PalmBeachPost.com/obituaries
Published in The Palm Beach Post from March 18 to March 25, 2012.