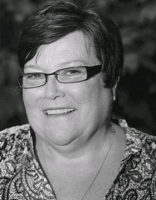 "Ultimately, Mary Jane's greatest passion was
for her family. Her entire family, both immediate
and extended, brought her so much joy…
almost as much as she brought to them."
Mary Jane Martin died Tues., April 3, 2012 in Vancouver, WA. She was born Jan. 27, 1948 in Twin Falls, ID to Edward and Mary Spellman. In 1955, the Spellmans, Mary Jane and her three brothers: Edward Jr., Daniel and Pete settled in the SE Portland, OR house that they would call home until adulthood. Mary Jane graduated from Marshall High school in 1966.
After graduating, Mary Jane moved to Fairbanks, AK where she taught school as a Jesuit volunteer. In 1968 she became a flight attendant for Western Airlines where she met her husband of 42 years, a pilot for Western (later Delta), Richard Martin.
Mary Jane and Dick raised their two children, Daniel and Allison in the San Francisco bay area, living in San Mateo, Belmont and finally settling in Portola Valley. During their 18 years in Portola Valley, Mary Jane was a faculty member at Ormondale Elementary School and a volunteer coordinator at Lucille Packard Children's Hospital at Stanford and was active in politics, working on some of the most important campaigns of the time.
In 1995, Richard and Mary Jane retired to the Salmon Creek area in Vancouver, WA to be closer to their children and their grandchildren.
Her years in Vancouver were marked by her devotion to community service. Mary dedicated her time to The Vancouver Symphony, the Children's Trust Fund, the YWCA and others. Her greatest passion became the Legacy Salmon Creek Hospital. She helped build the successful volunteer services program and was proud to serve as the original chair of the foundation board of trustees, where she served as a trustee until her death.
Mary and her family loved to travel, especially to their home away from home, Ixtapa, Mexico.
Mary Jane is survived by her husband, Richard; son, Daniel; daughter, Allison; daughter-in-law, Leanna; grandchildren, Chelsea, Gabriella, Quinn, Olivia and Alexander; brothers, Edward Jr., Pete and Alison; nephews, Erik, Jeffrey and Michael Spellman and their families; niece, Samantha Spellman; cousin, Becky and Richard Boudreaux and the Boudreaux family: Michael Boudreaux, Lisa Giacosa, and Robert and Ronald Boudreaux.
She was preceded in death by her brother, Daniel; and her parents, Ed and Mary.
The family wishes to offer its heartfelt gratitude to the Legacy Salmon Creek Hospital, The Ray Hickey Hospice House, Dr. Ashok Modha, Dr. Kathryn Kolibaba and all of the medical professionals who worked so compassionately with Mary during the past six months.
Funeral services will be at Evergreen Memorial Gardens on Sat., April 7 at 3:00 p.m. All who knew and loved Mary are invited to attend. A reception will follow.
Donations in Mary's name should be made to the Legacy Salmon Creek Foundation. www.legacyhealth.org/salmoncreekgiving
Please sign her guest book at: www.columbian.com/obits
Posted by Unknown at 3:46 AM