Notification of the passing of Air Force veteran and former DL pilot William Larry Martin, age 67.  Captain Martin passed away on May 9th while on vacation with his family.
To view/sign the online guestbook please visit the funeral home website at  http://www.hiers-baxley.com/obituaries/William-Martin20/
To the best of my knowledge the mailing address for the Martin family in Bronson is  PO Box 98 , Bronson, FL 32621-0098  or call (352) 486-2201
Thank you,
Carol
William Larry Martin
December 3, 1944 - May 9, 2012 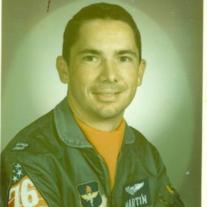 William Larry Martin, 67, of Bronson passed away on May 9, 2012 while on vacation with his family. Martin was born in Winnesboro, LA, and moved to Bronson at just 6 months of age. After graduating from the University of Florida in 1967, he entered in the United States Air Force where he was an Instructor Pilot in the Advanced Jet Trainer. Captain Martin spent the next five years serving his country before moving to South Florida in 1971. While in Ft. Lauderdale he was a pilot with Delta Airlines as well as a contractor specializing in industrial, commercial and whole subdivisions. Martin moved back to Bronson in 1983 where he took a job with the Levy County School Board as the director of Maintenance and Transportation. He enjoyed hunting, fishing, farming, and his cattle. He was happiest while on his tractor and spending time with his “Fussy Bear”, Emily Malloy. He enjoyed skeet shooting with his daughter Maggie and was also very proud of his family.
He is survived by his loving wife, Lorraine Martin of Bronson, son Matt (Kathryn) Wilkins of Mt. Dora, daughter Maggie Martin and future son in law Jimmy Vickers of Gainesville, granddaughter Ashlee McCard and great granddaughter Zayna McCard, both of Woodland, AL, brother Lee (Earleen Williams) Martin of Bronson and sister Carolyn (Timothy Jacobs) Jacobs, of Tampa, FL.
Funeral services will be Sunday, May 13, 2012 at 4:00 PM at the First Baptist Church of Bronson with visitation beginning at 3:00 PM. Burial will follow at Rosemary Hill Cemetery in Bronson.
In lieu of flowers the family has requested donations be made in Larry’s honor to the American Heart Association.
Arrangements are under the care of Hiers-Baxley Funeral Services, 1301 N. Young Blvd., Chiefland, FL 32626, 352-493-0050. On line condolences may be sent through our website at www.hiers-baxley.com
Posted by Unknown at 9:55 PM