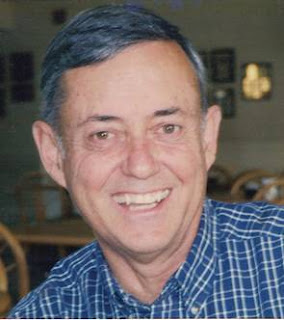 He was born in Mankato Minnesota in 1932, graduated High School in 1950, and graduated from the University of Minnesota in 1954.  He joined the U.S. Navy’s Aviation Officer Candidate program, entering flight training in Pensacola, FL before being commissioned in Corpus Christi, TX.  After receiving his wings, he joined the VA-125 “Rough Raiders” in 1956 where he flew the Douglas A-1 Skyraider (“Spads”) aboard the USS LEXINGTON (CV-16).  He served a total of 12 years between active duty and the reserves and left the Navy as a Lieutenant Commander.

In 1958 he joined Northwest Airlines, where he flew for 34 years until his retirement as a 747 Captain in 1992.  After retirement, he enjoyed nearly 20 more years of summers spent at the cabin on Roosevelt Lake, where he liked to fish and play golf.
We would like to thank the nurses and Dr. Dien at MOPHA and Curt and Cindy at Hospice Advantage for all the care they have given to Jim.

In lieu of flowers donations can be made to the American Cancer Society (towards Lymphoma & Leukemia Research) or Hospice Advantage at 18472 Kenyon Ave, Lakeville, MN 55044.

“And God’s Finger Touched Him and He Slept"

News has reached us that retired NWA pilot Captain Jim McLaughlin passed away June 9th after a long illness.  I believe James L. McLaughlin was born August 16, 1932 and was 79 years of age at the time of his passing June 9, 2012.  Survived by his wife Diane personal condolences may be sent to their home at
56 Birnamwood Drive , Burnsville, MN 55337-2977  ...  (952) 890-9339
Arrangements are pending and will be advised.
Thank you,
~ Carol Faulkner

By: University of St. Thomas News Service
Published on: Tuesday, June 12th, 2012 at 12:01 am
Please remember  in your prayers James L. McLaughlin, who died Saturday, June 9, after a long-standing illness. He was the father of Mark McLaughlin, Public Safety.
Funeral arrangements are pending.
Posted by Unknown at 12:58 AM