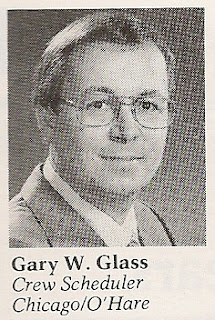 Born: October 29, 1941
Place of Birth: Martinsville, Ohio
Death: July 5, 2012
Place of Death: Fayetteville, Georgia
Obituary:
Gary Glass was born October 29, 1941 in Martinsville, Ohio and passed on Thursday, July 5, 2012. He graduated from Sabina High School in Sabina, Ohio in 1959. In December 1960 he began working for Delta Air Lines in Chicago, Illinois. After many positions he retired in November 1994 while working in the pilot crew scheduling department. He enjoyed a part-time job with the Airline Pilot Association after retirement.
He was preceded in death by his late wife, Sharon, his mother and step-father.
He leaves behind his best friend and wife, Marcia Glass of Fayetteville, GA; daughter and son-in-law Michelle and Ed Grabinger; step-sons Matt and Bridget Zatezalo of East Point, GA and Nick and Jacklyn Zatezalo of Alpharetta, GA; grandchildren Tyler, Aaron, Natalie Grabinger of Lakeville, MN, Charlotte of East Point, and Jake of Alpharetta, GA.; brother Paul and his wife Barbara Glass of Sabina, OH; nieces and nephews in Sabina and Berea, KY.
A funeral service will be held Monday, July 9, 2012 at 1:00 PM at Fayetteville First United Methodist Church with Reverend Mark Westmoreland officiating. He will lie in state from 12:00 to 1:00 PM.
The burial will follow at Camp Memorial Park. The family will receive friends on Sunday from 2:00 to 4:00 PM at the funeral home.
In lieu of flowers, please make donations to the Fayetteville First United Methodist Church, 175 East Lanier Avenue, Fayetteville, GA 30214.
Carl J. Mowell & Son, Fayetteville— http://www.mowellfuneralhome.com/
Services ..... Funeral Service:  Monday July 9, 2012, 1:00 PM at Fayetteville First United Methodist Church
Visitation:  Sunday July 8, 2012, 2:00 PM - 4:00 PM at Carl J. Mowell & Son Fayetteville Chapel
=========================
co-worker Jim writes:
July 06, 2012

Gary and I go back to Weaver Airline school in Kansas City in October 1960. We traveled together to Chicago to interview with Delta Airlines. We worked together in Chicago, Cincinnati, and Atlanta. Kathy and I will miss Gary very much. I know he is in a better place and we will see him again one day. I will always remember him by his nickname, Frag, given to him while in crew scheduling in Chicago. Gary and I hired on together and we retired together. Jim and Kathy Miller, Flint Texas.
===================
At 12:15 PM 7/5/2012, wrote:

Hi my name is Bridget Zatezalo, I was Gary Glass's daughter-in-law through his wife Marcia. Gary passed away this morning at 10:08am, and had your information listed as someone to be contacted when he passed. Marcia is still finalizing the funeral plans but they do know the service will be held at Fayetteville First United Methodist here in Fayetteville GA and the funeral will be at Mowell Funeral Home also here in Fayetteville.

Dave,
Gary Glass (Delta crew scheduler) passed away this morning (5 July) in Fayetteville, GA after a battle with cancer.  I will have more info as to the arrangements tomorrow.  Please post on the ORD net.