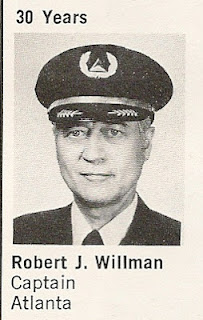 Word has been received of the passing of WWII veteran, Korean war veteran, retired DL pilot and Delta Golden Wings member, Captain Robert J. Willman, age 92.  Captain Willman hired on with Delta 04-02-1946 and retired with Delta, August 1976, with 30 years of service based ATL.  You can read Captain Willman’s biography and story of his WWII B-29 “The City of Duluth” aka “She Wolf” at http://www.vets-hall.org/stories/world-war-ii/robert-j-willman
To view the online obituary please visit http://www.duluthnewstribune.com/event/article/id/241881/
Survived by his wife Carolyn personal condolences may be sent to
32200 SW French Prairie Road Apt A115 , Wilsonville OR 97070-5449 ..... (503) 694-1019 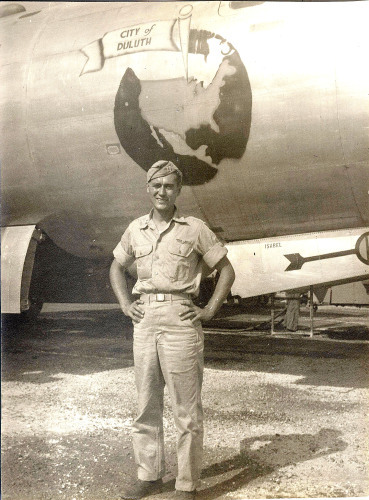 Duluth native Capt. Robert Willman stands in front of the B-29 Superfortress City of Duluth in Guam in 1945. Willman flew the bomber on six combat missions over Japan. He flew another B-29 — City of Red Bank — on another nine combat missions. The City of Duluth flew 24 combat missions over Japan. (Photo courtesy of Veterans’ Memorial Hall)
-----Original Message-----
From: Frank Hunt [mailto:frankasaur@comcast.net]
Sent: Monday, September 03, 2012 5:15 PM
To: info@deltagoldenwings.com
Subject: Passing of Capt. Robert J. Willman

Please note the passing of my father, a captain with DAL for 30 years.
Robert J. Willman died on August 15, 2012 in Portland, OR.  He was 92 years
old and is survived by his wife of 68 years, Carolyn, his son and daughter,
and 2 grandchildren.

Please contact me if you wish further information.
Thank you, Carrie Willman Hunt
carriewillmanhunt@comcast.net
~~~~~~~~~~~~~~~~~~~~~~~~~~~~~~~~~~~~
To view the online obituary please visit http://www.duluthnewstribune.com/event/article/id/241881/
Published September 02, 2012, 12:00 AM
Former ‘City of Duluth’ WWII bomber pilot dies at age 92
A Duluth native who piloted B-29 bombers, including the “City of Duluth,” on World War II combat missions over Japan has died.
By: Steve Kuchera, Duluth News Tribune
A Duluth native who piloted B-29 bombers, including the “City of Duluth,” on World War II combat missions over Japan has died.
Robert J. Willman died Aug. 15 in Wilsonville, Ore. He was 92.
“He was very passionate about his aviation history, as he should have been,” Veteran’s Memorial Hall Curator Dan Hartman said. “He was so proud to be flying the City of Duluth. It was an honor to fly it.”
Willman graduated from Denfeld High School in 1938 and enlisted in the Army Aviation Cadet program in 1941. After completing flight training, he worked as a flight instructor before being trained to fly B-17s and B-29s. Early in 1945 Willman was assigned to Guam as a B-29 pilot.
The B-29 was one of the largest aircraft used in World War II — 99 feet long with a wingspan of 141 feet and a gross weight of more than 52 tons. Powered by four engines, the Superfortress had a top speed of 365 mph, a ceiling of 31,850 feet and a range of 5,830 miles. It could carry a 20,000-pound bomb load.
According to Boeing, 3,970 B-29s were built. Each cost $639,188 – more than $7 million today. As part of the effort to encourage Americans to buy war bonds, many of the B-29s were named for cities in the United States.
“I called my crew together and asked each one to put the name of his hometown on a piece of paper,” Willman said in an account of his service he wrote for Veterans’ Memorial Hall “We’d put all the names in a hat and have one of our mechanics pull one name out of the hat. Whatever name was on the paper would become the name of our airplane. I believe there was a conspiracy. Without a doubt, there were 11 pieces of paper in that hat, all with the name Duluth on them.”
The City of Duluth had a second name as well – “The She Wolf.”
Willman and the City of Duluth flew their first bombing mission with the 330th Bombardment Group on April 12, 1945. The 18-hour-long mission to bomb an oil refinery north of Tokyo went well.
“We encountered no fighter opposition and only spotty and inaccurate flak,” Willman wrote.
But on their return to Guam, one of the group’s planes crashed as it tried to land. Willman attended the mass funeral for the crew the next day.
“It was sobering for us to see 10 wooden boxes all lined up beside the open graves,” he wrote. “Our group chaplain conducted a short but dignified service.”
According to a blog dedicated to the 330 Bomb Group, the group lost nearly 100 men in combat, training or in Japanese captivity.
The B-29 was built for bombing from high altitude. But over Japan, many of the plane’s missions were not to drop conventional bombs but rather incendiaries from lower altitudes to set cities ablaze. One of Willman’s missions was to firebomb Tokyo.
“About 100 (miles) out we could see a glow on the horizon,” Willman wrote. “This turned out to be Tokyo on fire.”
After six missions, Willman and his crew returned to America for more training. When they returned to Guam, Willman flew another nine combat missions on the City of Red Bank, also known as “The Happy Savage.” He flew its final mission as the Japanese surrendered after two other B-29s — Enola Gay and Bockscar — had dropped atomic bombs on Hiroshima and Nagasaki.
“Several times while on these missions there was time to think about what we were doing, and my thoughts were generally of the nature that some day I could fly and do something constructive rather than destructive,” Willman wrote years after the war. “I realized that what we were doing had to be done in view of the circumstances, but it brought no joy.”
After the war, Willman became a pilot for Delta, until he was recalled to service during the Korean War. During that war he flew a C-124 military transport.
“These were secret missions in which, at the beginning of the Cold War, the United States was pre-positioning atomic weapons over to Europe,” said Willman’s son, Robert Willman Jr.
After that war, Willman returned to Delta, flying for them until retiring in 1976.
“He was a lifelong aviator,” Willman Jr. said. “During his career he amassed a total of 32,000 flight hours without accident.”
Willman’s brother, Allen, still lives in Duluth. He is trying to get a model of the City of Duluth built for display at Duluth International Airport.
“I think it would be a fitting thing,” he said. “It is nice that the city of Duluth remembers they were involved in World War II.” 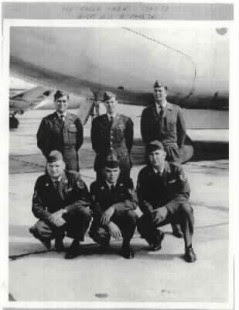 http://www.vets-hall.org/stories/world-war-ii/robert-j-willman
Mr. Willman served in World War II in the Pacific Theater and in the Korean War.
He enlisted in the U.S. Army on September 25, 1941. He served as a flight instructor at Gardner Field in California and at Pecos, Texas. He was then assigned to 330th Bomber Group. He was assigned to Walker Army Air Field in Hays, Kansas. Based in Guam, he flew B-29 missions against Japan in the latter part of the war.
His rank was Captain.
Source: Veteran’s account (see below)
Robert J. Willman of Duluth enlisted in the Army Aviation Cadet program on September 25, 1941. He completed flight training on April 24, 1942, and worked as a flight instructor at Gardner Field in California and at Pecos, Texas.
He took B-17 training in 1944 and trained as a commander of B-29 bombers. He was promoted to captain and assigned as a pilot with the 330th Bomb Group in the Pacific and flew missions in the air offensive against Japan in the final months of World War II. He was separated from active duty on January 4, 1946, but was later recalled to active duty during the Korean War.
Willman was a pilot with Delta Airlines for more than 30 years and retired in 1976.
In early 1945 Willman was assigned to Guam as a B-29 pilot. As part of the effort to raise public support for war bond drives, the big bombers were each named for a city in the United States.
He describes what happened: “I called my crew together and asked each one to put the name of his hometown on a piece of paper. We’d put all the names in a hat and have one of our mechanics pull one name out of the hat. Whatever name was on the paper would become the name of our airplane. I believe there was a conspiracy. Without a doubt, there were 11 pieces of paper in that hat, all with the name Duluth on them.”
Thus Willman’s B-29 became the City of Duluth. And here is his story of what happened to the plane and crew:
.....  read more at
http://www.vets-hall.org/stories/world-war-ii/robert-j-willman 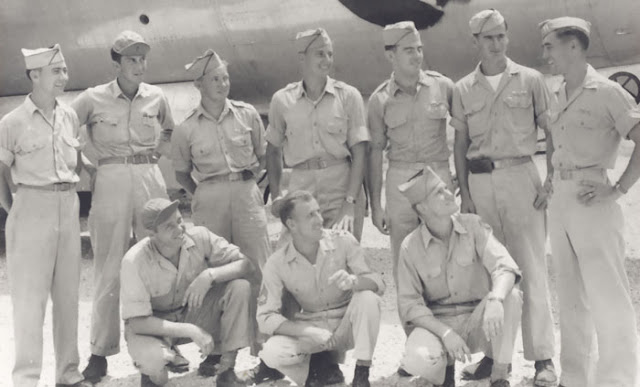