Update/Obituary notice for Captain Fulkerson:
Retired Delta Pilot, Captain Robert (Bob) Fulkerson died August 15 in Calgary, Canada. Bob was a veteran Maui outrigger canoe paddler, and suffered an apparent massive heart attack during the International Vaa World Cup Sprint races. Bob collapsed near the finish line of the race.
Teams from around the world honored Bob with traditional protocols from their countries. There were honors from Hawaiian chants to a Scottish Bagpiper playing Amazing Grace. The competitors raised their paddles in honor of Bob and his passion for the sport as his body was transported from the race. While his family and friends were shocked and deeply saddened by the loss, they have taken comfort in the fact he died doing what he loved.
Bob was a Viet Nam Veteran and then served as a Delta Airlines pilot from 1972 to 2002. He was based in Los Angeles during his last three years with Delta and flew from LAX to Honolulu and LAX to Maui. Prior to this assignment, Bob flew internationally. He retired to the North Shore of Maui.
Bob is survived by his wife Kim Fulkerson of Maui; his sons, Robert (Bobby) Fulkerson and wife Sloan of Portland, OR, and Kurt Fulkerson of Austin, TX. He is also survived by his stepson Dana Heter and wife Amanda of Dallas, TX and stepdaughter Elizabeth Losito and husband Michael of Phoenix, AZ, his father Robert Fulkerson and wife Julia of Ajo, AZ, and his sisters Nancy Cranston and husband Steve of Honolulu, HI and Kathy McMahan of San Raphael, CA.
Services were held in Maui at the Kihei Canoe Club where Bob was a ten-year competitive paddler. His ashes were placed in the Pacific Ocean where he loved to paddle. Pastor Shaun Waite officiated.
The family suggests those wishing to make memorial donations in Bob’s honor send any gifts to Waipuna Chapel, 17 Omaopio Road, Kula, HI 96708. (See www.waipunachapel.com for more information on the chapel and its ministry.)

~ IN MEMORY ~
DL Capt. Robert W. ‘Bob’ Fulkerson
May 2, 1942 ~ August 15, 2012
Word has just reached us that retired Delta Captain Bob Fulkerson suffered a massive heart attack while competing in canoe paddling competitions in Canada.  Bob hired on with Delta 11-27-1972.  He was based DFW for most of his career, then JFK, and prior to retiring May of 2002 was based LAX.  The Kihei Canoe Club held a Celebration of Life and Ashes to Sea ceremony for Bob on Sunday, August 26th.   Bob had planned to be in Arizona August 24th for his dad’s 90th birthday celebration.  Captain Robert Wilmarth ‘Bob’ ‘Bobby’ Fulkerson was 70 years of age at the time of his passing August 15, 2012.
For those wishing to send personal condolences, I believe Kimberly White Fulkerson can be reached at
1704 Treehouse Lane,  Plano  TX 75023-7432
and Captain Fulkerson’s father
Robert L. Fulkerson can be reached at  140 W. Morondo Ave., Ajo AZ 85321-2417
Thank you,
~ Carol 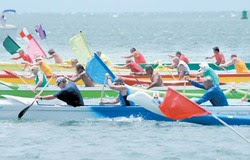