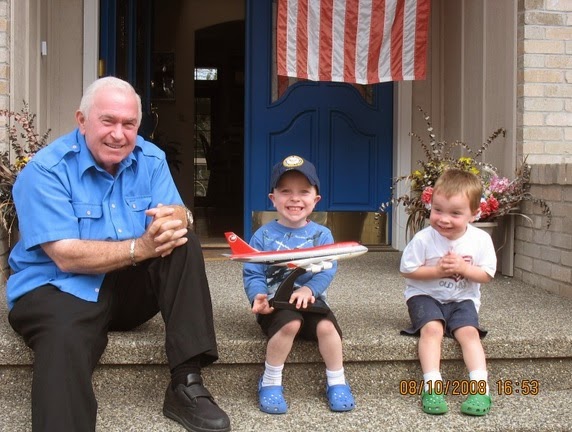 Last week we received word that NWA pilot Duane ‘DJ’ Jean Hoff was found in his home deceased due to an apparent heart attack.  Born/raised in Minnesota Captain Hoff was 72 years of age at the time of his passing.  He served in the military and joined Northwest Airlines 11-06-1967.  He officially retired with Northwest in 1996.  Captain Hoff was well respected by his peers....always professional, upbeat and was a good friend to many.  Duane was widowed in 2003 with the death of his wife Diane neé Davis, his lifelong sweetheart since third grade.  They married in April 1964.  Duane and Diane are survived by their children Holly and Corey.
Captain Hoff had most recently resided at
5473 Turnberry Pl SW  ,  Port Orchard  WA 98367-9177.
We have not seen an obituary in print yet but we have been advised that services for Captain Hoff will be held at 11 a.m. on Saturday, May 24, 2014 at St. Hedwig Catholic Church located at  129  29th Ave NE, Minneapolis, MN 55418.
Should we receive additional information, new postings will be made available on our blogspot at http://pcnflightwest.blogspot.com/
Thank you,
~ Carol Faulkner, PCN death notice communicatordeath@pilotcommunication.net
http://pcnflightwest.blogspot.com/
Duane Hoff

Duane Hoff is survived by his daughter Holly and son Corey.  His wife Diane (and lifelong sweetheart since third grade) passed away ten years ago. A funeral service will be held at 11 a.m. on Saturday, May 24, 2014 at St. Hedwig Catholic Church: 129 29th Ave NE, Minneapolis, MN 55418

NWA Captain Duane J. Hoff passed away last week due to an apparent heart attack. Duane was 72 years old, hired by NWA in November of 1967 and officially retired in 1996. Duane was a favorite of many crew members. He was ever the professional, always upbeat, and would respond to challenges with a quirky smile.  Duane had the personality and social skills for meeting and becoming friends with interesting people all over the world. Few knew that Duane was also a serious golfer.  He was a regular at the Dean-Ludwigsen Invitational until arthritis ruined his game

Duane is survived by his daughter Holly and son Cory.  His wife passed away a few years ago.  No information yet on service arrangements.

NWA pilot Duane J. Hoff passed away due to an apparent heart attack.  Duane was 72 years old and was hired by NWA in November of 1967.  He officially retired in 1996. Duane was a favorite to work with on the line  He was accomplished at meeting and becoming friends with interesting people all over the world.
The following message originated with his friend, NWA/Delta pilot Marv Peterson........................
Bill Day
“I am sorry to have to send this message, but my daughter, Ginger called to let me know DJ was found dead Wednesday morning from an apparent heart attack. His daughter Holly had not heard from him since Saturday so she asked DJ's neighbors to check yesterday..................
When I get more information I will share.
Marv

Diane Margaret Hoff, 62, of Port Orchard died Tuesday of cancer at her home. She was born in Minneapolis to Raphael and Margaret (Ritten) Davis. She graduated from St. Anthony High School in Minneapolis in 1959. On April 22, 1964, she married Duane Hoff. Mrs. Hoff was a member of St. Gabriel Catholic Church in Port Orchard and the Children's Hospital Guild. She was a longtime PTA and school volunteer and a former board member of the Kindering Center for disabled children (ages birth to 3 years) in Bellevue. Survivors include her husband; her mother, now of Brooklyn Center, Minn.; a son, Corey Hoff of Scottsdale, Ariz.; a daughter, Holly Hoff of Seattle; two brothers, Robert Davis of Brooklyn Center and James Davis and his wife, Laura, of Brooklyn Park, Minn.; three sisters, Patricia Armstrong and her husband, Patrick, of Corcoran, Minn., Judith Peacha and her husband, James, of Hastings, Minn., and Kathleen Dickinson and her husband, Gary, of Rogers, Minn.; and many nieces and nephews. Her father preceded her in death. A funeral Mass will be celebrated at 11 a.m. Saturday at Sacred Heart Catholic Church, 9460 NE 14th St. in Bellevue. Arrangements are under the direction of Rill Chapel's Life Tribute Center in Port Orchard. An online memorial can be seen at www.rill.com  In lieu of flowers, memorial donations may be made to the Diane Hoff Children's Book Fund at any branch of U.S. Bank.
Posted by Unknown at 5:10 PM