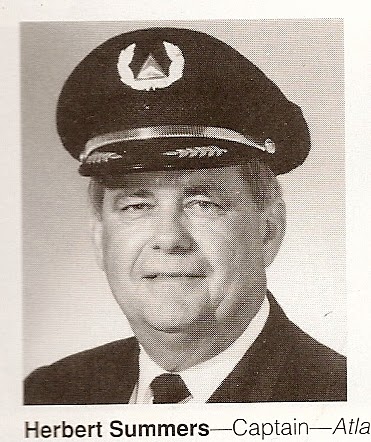 Word has been received with the passing of retired Delta pilot and Delta Golden Wings member Captain Herbert ‘Herb’ Summers, father of DL F/O Donald Summers.  Born May 16, 1935 Captain summers had just reached his 79th birthday at the time of his passing May 27th.  Captain Summers joined Delta Air Lines 04-17-1961 and retired in 1995, based 031/ATL.  Survived by his wife Jane Harris Summers, personal condolences may be sent to the family at
320 Birkdale Drive, Fayetteville  GA 30215-2720  ...  (770) 461-4648  ... (770) 632-2616
To view/sign the online guestbook please visit the funeral home website at http://www.mowellfuneralhome.com/
Memorial services for Captain Summers will be held this Friday, May 30th at 11:00 AM in the Chapel of Mowell Funeral Home. Visitation with be Thursday evening prior from 5:00-7:00 PM.  Arrangements have been entrusted to Carl J. Mowell & Son Funeral home  www.mowellfuneralhome.com , Fayetteville GA.
Thank you,
~ Carol
Life Legacy...............................
Herbert Summers, 79, passed away May 27, 2014. He was born May 16, 1935 to H. L. Summers and Kate Summers in Atlanta, GA. The family moved to Mississippi near the end of WWII. He graduated from high school in Meridian, MS in 1953. He entered Air Force Aviation Cadet Training in 1954 where he received Air Force wings and commissioned as a 2nd lieutenant in 1956. He graduated from the University of South Mississippi in 1959 and worked full-time with the Mississippi Air National Guard. for a few years before applying for a pilot position in 1961. He flew numerous aircraft with Delta and flew special flights during the introduction of the B767 and B757 for Delta. He was very proud of flying charters in support of bringing our troups home from Iraq during Desert Storm in 1991. The last 5 years was all international flying on three different long range Delta aircraft, B767 ER, MD11, and L1011-500, flying to Europe and Asia. His retirement flight was to Dublin, Ireland, and back to Atlanta on May 12, 1995, prior to his 60th birthday.
Mr. Summers is survived by his wife of 49 years Jane Harris Summers; sons Steve (Cathy) Summers and Donald (Jennifer) Summers; grandchildren Josh, Emily, Blake and Grant.
A memorial service will be held Friday, May 30, 2014 at 11:00 AM in the Chapel of Mowell Funeral Home, Fayetteville. The family will receive friends Thursday from 5:00 to 7:00 PM at the funeral home. In lieu of flowers the family request donations be made to The American Diabetes Association www.diabetes.org/donate  or The Wounded Warrior Project www.woundedwarriorproject.org
Carl J. Mowell & Son Fayetteville Chapel www.mowellfuneralhome.com
From: DONALD     Sent: Wednesday, May 28, 2014 7:43 PM     Subject: Herbert Summers

Could you please put the word out to the group that my father Herbert Summers passed away on Tuesday May 27 at the age of 79.  He was with DL from April 61 to May 95. Visitation will be Thursday May 29 at 1700 hrs at Mowell's funeral home in Fayetteville, GA with funeral services also at Mowell's Friday at 1100.  The family is requesting a gift to the American Diabetes Association in lieu of flowers.  A full obituary will also appear in The Citizen and AJC on Thursday.
Thanks-
Donald Summers   dhsummers@comcast.net
ATL 7ERB
Posted by Unknown at 12:31 AM