This is all that I have received.
Thanks
Jim Sibley
From: k kelly Sent: Friday, June 20, 2014 10:07 AM
To: jasibley@earthlink.net ; mailto:hineenee@comcast.net ; hineenee@comcast.net
Subject: Robert Irvin Memorial Service - Saturday @ 11AM
Please call me with questions and/or concerns.  In lieu of flowers, we are asking that all contributions go to the Parkinson Foundation. Contact information to be provided on Saturday.
Thank You,
Kim Kelly, Bob's Lead Caregiver   kk2assist@yahoo.com
678-656-7130 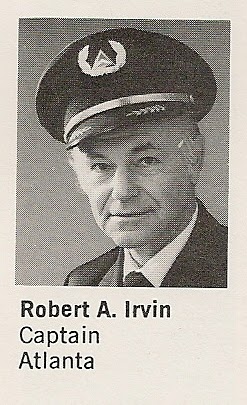 Word has been received with the passing of Delta Golden Wings member retired Delta Pilot Captain Robert Agustus Irvin. Captain Irvin joined Delta Air Lines 10-02-1951 and was based Atlanta.  Our records indicate his date of birth as May 12, 1921 and that he was 93 years of age at the time of his passing.  Captain Irvin had struggled with the effects of Parkinson’s  disease for many years.  He was widowed in July 2009 with the passing of his wife and care giver Sara Lacy ‘Sally’ Irvin.....her obituary appears below.
The Irvins had most recently resided at
54 Robyn Way , Marietta, GA 30062-5174  ...  (770) 676-9820
Online condolences for the family may be shared at the funeral home website but to date services have not been posted.
http://obits.dignitymemorial.com/dignity-memorial/obituary.aspx?n=Robert-Irvin&lc=4945&pid=171387820&mid=6012814
Arrangements have been entrusted to
H.M. Patterson & Son-Canton Hill Chapel
1157 Old Canton Road Ne, Marietta, GA 30068 | 770-977-9485
Thank you,
~ Carol for the PCN

---------------------------------------------
AJC article, Mrs. Irvin’s obituary:   http://www.ajc.com/news/news/local/sara-irvin-85-skied-slalomed-for-years/nQKsJ/
Sara Irvin learned how to water ski when she was a young woman. Her family enjoyed Lake Allatoona and occasionally skied on Lake Rabun in North Georgia.  Mrs. Irvin skied well into her 80s.  “I told her I thought she was nuts,” chuckles Bess Hopkins of Athens, Mrs. Irvin’s second cousin. “She just laughed and kept on going.”
When she stopped completely, it wasn’t for lack of stamina or desire. “Know why she quit?” asked her son, Michael Davis of Atlanta. “My stepfather has Parkinson’s disease and she was worried about him. She said, ‘If something happens to me, who is going to take care of him?’ She could have skied two or three years longer. She didn’t just ski, she slalomed, too.”
Sara Lacy “Sally” Irvin, 85, of Marietta, died July 31 of nonsmoker’s lung cancer at her home. A memorial service will be held at 2 p.m. Saturday in the Canton Hill chapel of H.M. Patterson & Son in Marietta, which is handling arrangements.
Mrs. Irvin was raised in Albany where her parents ran a dairy farm. She graduated from Albany High School, them moved in the 1950s to College Park because her father took a job in aviation.
After marriage, Mrs. Irvin settled down to raise three children in College Park, her home for nearly four decades. When the children grew older, the divorced, single mom entered college. She earned a bachelor’s degree in interior design at Georgia State University.
“None of her other friends did that,” said Sara Lanier of Jonesboro, who lived across the street from Mrs. Irvin in College Park at the time. “I know I didn’t. It was a wonderful thing that she did.”
Mrs. Irvin’s cousin was the late Noah Langdale Jr., Georgia State’s president from 1957 to 1988. He made the graduation ceremony special, said her daughter, Jennifer Powell of Charlotte, N.C., because he presented Mrs. Irvin with her degree.
“I was proud of her,” Mrs. Powell said. “Growing up, we ate a bunch of Pop Tarts because she was always studying. She made the dean’s list.”
Mrs. Irvin was a petite woman who embraced fashion. Every little ribbon, every little bow matched perfectly, said her cousin, Mrs. Hopkins.
“She was very neat,” she said, and just liked things to match so, consequently, when she selected things they were ideal.”
“She always looked like something from a magazine,” her son said. “I’d always tell her she got way more than her share of talent. She was a good cook, a good decorator and an excellent dresser.”
Mrs. Irvin and her husband, Robert, were married in 1976. In recent years, they enjoyed their summer getaway on Lake Allatoona and also traveled extensively — Hawaii, California, Europe and elsewhere.
In addition to her husband and daughter, survivors include two sons, Bill Davis of Martinez and Rob Irvin of New York City; and two grandchildren.
----------------------------
Sara Lacy Irvin (Sally) died July 31, 2009, from non-smokers lung cancer. She was born in Dothan, Al, graduated from Albany High School, and earned a degree in Interior Design from GA State University. In 1976, she married Robert Irvin, a Delta pilot. They enjoyed their summer retreat on Lake Allatoona, where Mrs. Irvin waterskied into her early 80's. She and husband, Bob, traveled often thoughout the U.S., Europe, and the Hawaiian Islands. Mrs. Irvin had three children from a previous marriage; Bill Davis and wife, Bonnie, of Martinez, GA, Michael Davis of Atlanta, and Jennifer Powell and husband, Brian, of Charlotte, NC. Mrs. Irvin was preceded in death by her parents, George Clarence Lacy and Alice Harris Lacy, and her brother, George Lacy, Jr. In addition to her husband, Mrs. Irvin is survived by his son, Rob, and two grandchildren, William Davis of Marietta, and Lacy Powell of Charlotte, NC. Mr. and Mrs. Irvin were members of Roswell Street Baptist Church in Marietta for many years. In addition to living in Marietta, Mrs. Irvin lived in Albany and College Park.

From: Jim Sibley   Sent: Wednesday, June 18, 2014 8:38 AM   Subject: Capt. Bob Irvin
Capt Bob Irvin passed away 16 June.  Will send final plans when I receive them.  Bob was 94 years old,  one of our oldest and had been living with a severe disability for years.
Jim Sibley
Posted by Unknown at 3:25 AM