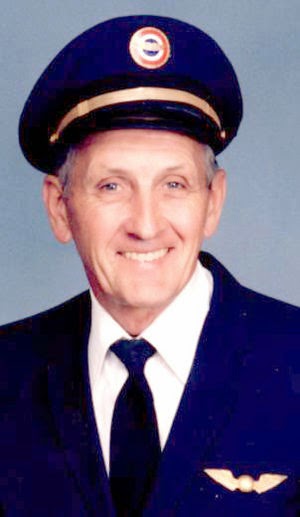 Notification with the passing of RNPA member NWA retired pilot F/O Kenneth E. Moen, age 85.  After his military service, Mr. Moen hired on with Northwest 10-17-1955.  The obituary reads he retired in 1998, but that perhaps should read 1989.
To view the online obituary please see  http://www.jordannews.com/news/obituaries/ or http://belleplaineherald.com/main.asp?SectionID=13&SubSectionID=56&ArticleID=4529
As noted in Mr. Moen’s obituary, services will be held Saturday, August 9. Visitation 9:30 to 11 a.m., service 11 a.m., at Wagner Funeral Home in Jordan MN.
Full Military honors and burial at Ft. Snelling on Monday, August 11, at 1:30 p.m. at assembly area # 5.
Survived by his wife Genevieve personal condolences may be sent to the family at
9535 Union Hill Blvd.,  Belle Plaine  MN 56011-9214  ...  (952) 873-4455
Should we receive more information we will be sure to update our blogspot
at   http://pcnflightwest.blogspot.com/
Thank you,
~Carol for the PCN
=======================================
Obituary for Kenneth E. Moen: Newspaper Obituary
Jordan Independent (MN) - Monday, August 4, 2014
Mr. Kenneth E. Moen, age 85, "flew West" on Thursday, July 31, 2014. The cause was lung cancer. Born July 16, 1929, on the family farm near Carpenter, IA, to Carl and Sylvia Moen.
He was baptized and confirmed at Deer Creek Lutheran Church in rural Northwood, IA. He graduated from St. Ansgar High School at 16 years old. After graduation, he enlisted into the Army Air Corps. He served as a training instructor on the Mobile Training Unit, which flew to many bases to train Army mechanics and pilots on the various aircraft systems. His specialty was the engine systems. During his commission, he was awarded the WWII Victory medal. After three years, he was honorably discharged at the Staff Sargent rank.
In 1951, he married Genevieve Bakken from Hanlontown, IA and moved to Greeley, CO. He co-owned a truck repair gas station.
After moving back to MN, he worked three jobs to finance and complete his private pilot's license. Flying was his first passion. He purchased a farm near Belle Plaine and achieved his second passion, farming.
He started for Northwest Airlines as a mechanic and progressed to flight engineer then pilot. Many years as First Officer until retiring in 1998, having 30 years of service to NWA. He flew the Douglas DC-3,-4,-6, -7, -10, the Lockheed Electra, the Boeing 720/320 and the 747. His pilot nickname was "Greaser" since his landings were consistently smooth.
The little boy from a small IA farm dreamed of flying planes, he did and loved it!
Survivors include his wife, Genevieve; son, David Moen; daughter, Sherry (Ken) Pekarna; grandchildren, Tiffany (Justin) McKay, Tyler Pekarna, Justin (Angela) Moen, and Dustin Moen; great-grandson Andrew; brother, Richard; step-brothers, Orlan Brunsvold, Ruvella Barndt; brother-in-law, Duane Bakken; sisters-in-law, Karen Predovich, and Sylvia Toney; and many nephews and nieces.