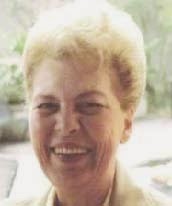 News has reached us with the passing of Patsy Sue neé Hodges Scaggs, wife of Delta Golden Wings member retired C&S/DL pilot Captain Bill Scaggs.  Patsy was 85 years of age at the time of her passing July 23rd.  Services for Patsy were held July 28th in Bixby OK.  The online obituary may be viewed at the funeral home website  http://www.leonardmarkerfunerals.com/obituaries/Patsy-Scaggs/
Survived by her husband Bill personal condolences may be sent to their residence at
2900 Wingren Road , Irving  TX 75062-4519  ...  (972) 255-0915
Captain Scaggs may also be reached via email at b.scaggs@verizon.net
Thank you,
~ Carol for the PCN
Memorial blogspot http://pcnflightwest.blogspot.com/

Funeral Services were held on Monday, July 28, 2014 in the Leonard & Marker Chapel for Patsy Sue Scaggs. It was officiated by Rev. Guy Ames. Interment followed in the Bixby Cemetery. Patsy Sue Scaggs was born on June 7, 1929 in Henryetta, to the late Paul and Ruby Hodges. She married her loving husband Bill in Tulsa, on March 27, 1951 and loved and raised her son, Max Scaggs. In 1956, the family settled in Irving, Texas where she continued her life as a homemaker, wife, mother, and eventually grandmother and greatgrandmother until her passing on July 23, 2014 in Irving at the age of 85. Patsy is survived by her husband, Bill Scaggs; son, Max Scaggs and his wife Beverly of Loveland, Colo.; her sister-in-law, Alla May Stanley of Edmond; her granddaughter ,Michelle Cooke and her husband Brian of Ada, Okla.; her grandson, Kyle Scaggs and his fiancé Amy Patterson of Addison, Texas; five great-grandchildren, Patrick Cooke, Sean Cooke, Kelly Cooke, Zane Scaggs, and Benjamin Scaggs; and numerous nephews and nieces. She was preceded in death by her father Paul Hodges; her mother Ruby Hodges; and her brother Jack Hodges and his wife Joan. Casket bearers were Leon Burke, Cole Burke, Kenny Adams, Ross Hodges, Patrick Cooke and Sean Cooke.