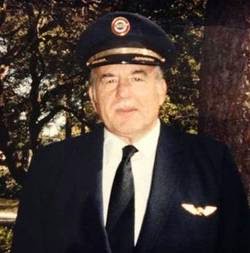 News has reached us with the passing of Marine Corps veteran and retired pilot Captain William Chagares, age 82.  Captain Chagares flew for Southern Airways, made the merger with Republic, and retired with Northwest Airlines.  Services for Captain Chagares were held today.  Interment will be conducted Monday, October 13th at 11:40am at Barrancas National Cemetery, 1 Cemetery Road, Pensacola FL.
To view/sign the online guestbook please visit the funeral home website at http://www.heritagegardensfuneralhome.com/
(I see they have Chagares mispelled as Charages) or
http://www.legacy.com/obituaries/nwfdailynews/obituary.aspx?n=william-chagares-bill&pid=172751854
Survived by his wife Nita Clements Chagares, personal condolences may be sent to the family at
408 Regatta Drive , Niceville  FL 32578-2463   (850) 729-3906
Thank you,
~ Carol for the PCN
Memorial blogspot   http://pcnflightwest.blogspot.com/
----------------------------------------------------------------
William "Bill" Chagares
Life Legacy
William 'Bill' Chagares aged 82, passed away peacefully October 8, 2014 surrounded by his loving family. Born in New Haven, CT, Bill was a long time resident of northwest Florida and resided in Niceville.
Bill is survived by his wife of 55 years, Nita Clements Chagares and two children Christopher (Lorra) of Stockbridge, GA and Cassaundra Chagares Rasmussen of Crestview, sisters Sandy Chagares Tashik of Shalimar and Connie Chagares of New Haven, CT and brother Constantine 'Gus' Chagares of Stratford, CT, grandsons Jeramy Rasmussen and Jamie Chagares of Shalimar and Petty Officer Alex Chagares of Virginia Beach, VA and numerous nieces and nephews.
Bill is a proud member of the United States Marine Corps and USMC reserve retiring as a major. He served in Japan during the Korean War and was a pilot instructor at NAS Pensacola. Bill is a retired Northwest Airlines (formerly Republic Airlines and Southern Airways) captain. He was a member of the Fort Walton Beach Yacht Club and US Sail & Power Squadron.
Visitation will be Saturday October 11th, 10:00am - 11:00am at St. Jude's Episcopal Church 200 N. Partin Drive Niceville. A funeral service will follow at 11:00am. A reception will be held at the Fort Walton Beach Yacht Club 180 Ferry Road NE Fort Walton Beach at 1:00pm.
Interment will be conducted Monday October 13th at 11:40am at Barrancas National Cemetery 1 Cemetery Road Pensacola.
In lieu of flowers, please make donation in Bill's memory to the charity of your choice.
Thank you to those friends and family members who have expressed their love and support during Bill's illness. A LIFE WELL LIVED.
-------------------------------
From: John Campbell    Sent: Saturday, October 11, 2014 7:25 AM
My friend who passed away two days ago was a Marine Aviator who flew with some of our guys while in the Marines.  Two that you might know are Lefty Engelking, and TK Roe.  ................. retired NWA pilot, but one I call kinda like the Forrest Gump of aviation, in that his life touched people like the Great Santini, TK Roe, Ensign Gay, The Memphis Belle, MOH recipient Michael Novosel.  Bill was probably one of the nicest NWA pilots you never flew with.
John
850-543-2284


jmcsoup@gmail.com
Posted by Unknown at 3:31 PM