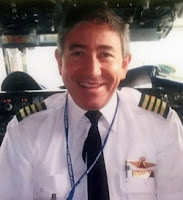 
Mr. Carlos Edward Emmons, age 57 of Villa Rica, Georgia passed away Monday, July 18, 2016.
Mr. Emmons was born in Bogota Colombia, South America on August 13, 1958, the son of the late Harry Irving Emmons and
Margarita Venegas Emmons. He was a loving husband and father who loved the outdoors and enjoyed camping, flying and horseback
riding as well as watching Colombia and USA soccer. He was a pilot for Delta Airlines for 25 years. He received his Bachelor Degree in
Electrical Engineering at The Ohio State University and he attended Our Lady of Perpetual Help Catholic Church.
Survivors include his wife of 30 years, Susan A. Emmons; daughter, Chelsea Emmons and son, Jack Emmons all of Villa Rica; several
nieces, nephews, cousins and extended family in Colombia, South America. Besides his parents he was preceded in death by his half
brothers, Robert and Harry Emmons.
The family will receive friends at Almon Funeral Home on Friday from 10 a.m. until the service hour.
Memorial service will be Friday, July 22, 2016 at 11 a.m. from the chapel of Almon Funeral Home.
Inurnment will be in Our Lady of Perpetual Help Catholic Church Cemetery.
In lieu of flowers memorial donations may be made to Candler Field Flying Club, 349 Jonathan's Roost Road, Williamson, GA 32566.
Posted by Unknown at 8:02 PM