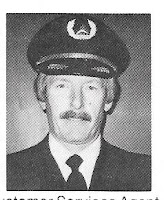 We have received news with the passing of retired Delta pilot Captain Ronald Arthur Oeschler, age 80.  Captain Oeschler joined Delta Air Lines 04-01-1963 and was Houston based.  We understand Captain Oeschler succumbed to complications due lymphoma and a recent fall, but we have no other information.  I’ve not been able to locate an online obituary or funeral home memorial guestbook.
Whitepages lists the family contact as
11511 Ruby Canyon Lane, Houston TX 77095-4866.....(713) 789-7854
Should we receive more information we will be sure to pass it along.
Thank you,
~ Carol for the PCN
From: Ted Langworthy     Sent: Friday, November 18, 2016 7:44 PM   To: PilotCommunicationNet@googlegroups.com


Mark. Ron Oeschler just passed away this morning. He has been ill for years with lymphoma and I was planning on going over to Houston tomorrow morning as he was told he had about 3 months to live but he fell while in the hospital and it was totally unexpected. Thanks for all you do Mark............................Ted
Posted by Unknown at 6:42 PM