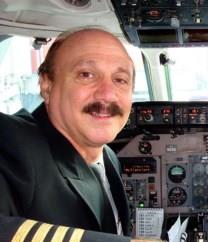 Stephen George Kaminski II passed away on December 30, 2016 after fighting a battle with cancer. Steve recently retired as a Boeing 777 Captain for Delta Air Lines. Steve started his airline career with Wien Air Alaska in 1974, was hired by Western Air Lines in 1977 and retired from Delta October 3, 2016.
Steve was a loving husband to Denise Kaminski and a proud father of Stephen Kaminski III, Deven Cason and her husband Cory Cason, Tairyn Mosley and her husband, Bryan Mosley, and Jonathan Kaminski. Steve also leaves behind three deeply cherished grandchildren, CJ Cason, 5, Paisley Mosley, 2, and Elliana Cason, 1, as well as many nieces, nephews, cousins and an outpouring of extended family and friends. His extended family included all of those employed at Delta, as he spent numerous birthdays and holidays, and shared many trying times with so many of them over the course of his career.
En lieu of flowers, donations may be made to the St Jude Children's Research Foundation: http://fundraising.stjude.org/site/TR/GiftFunds/GiftFunds?px=4374327&;pg=personal&fr_id=39300
Personal condolences may be sent to the Kaminski Family at, 3436 Harrison Rd. East Point, GA 30344, B777jets@aol.com  or (678) 586-8100
Obituary:
Stephen George Kaminski II, 65, Atlanta, GA died Friday, December 30, 2016 after fighting a battle with cancer. The funeral will be held on Saturday, January 7th at St John the Evangelist Catholic Church (240 Arnold St, Hapeville, GA 30354) at 1 p.m., followed by his burial with military honors at the College Park Cemetery (3600 Adams St, College Park, GA 30337).
Visitation will be held from 5 to 8 p.m. on Friday, January 6th at the Forest Lawn Funeral Home & Memorial Garden: 5755 Mallory Rd, College Park, GA 30349
Steve was born October 4, 1951 and was a descendent of Stephen George Kaminski and Philomena Kaminski in Biloxi, Mississippi. He attended Embry-Riddle Aeronautical University, Daytona, FL with a Bachelor of Science in Aeronautics, and a Masters in Aviation Management from Delta State University.
Steve was an Airline pilot for over 40 years, including 25 years as Captain. During this period, he flew numerous military charter flights using REACH call sign during Desert Shield, Desert Storm, and Iraqi Freedom. Steve was well known around the world, establishing friendships everywhere he went. He always placed the best interest of others before himself. Drinks are being shared from continent to continent while memories and laughs are being told in his honor.
Steve and Denise have strong ties with two organizations they held dear to their heart, St Jude Children's Research Foundation and the Mississippi State Guard. Steve achieved the rank of Colonel and was personally selected to serve as the Deputy Commander of the organization, which involved assisting in Emergency Preparation for the state of Mississippi.

~ IN MEMORY ~
WA/DL Capt. Steve Kaminski
October 4, 1951 ~ December 30, 2016
We have received word with the passing of WA/DL pilot Captain Stephen G. Kaminski II, age 65.  Captain Kaminski joined Western Airlines 08-01-1977 and was based CVG and ATL with Delta Air Lines.  He is the father of son Steve who is a FO B7ER based JFK.  Captain Kaminski passed due to complications Stage IV lung cancer.  He is survived by his wife Denise and their children.  Services will be held Saturday, January 7th with visitation the evening prior...please see below....with a reception and celebration of life event following services on Saturday.
The family invites all of the Delta family to attend...arrangements entrusted to Forest Lawn Mortuary of College Park, Georgia.
To view/sign the online guestbook please click on at this site
http://obits.dignitymemorial.com/dignity-memorial/obituary.aspx?n=Stephen-Kaminski&lc=5286&pid=183299238&mid=7234913
If you are able to attend and for more information, son Steve requests you contact him at sgkthree@gmail.com  ... (678) 595-8296
Thank you,
~ Carol for the PCN
Obituary.........................................
Funeral service : Saturday, January 07, 2017 | 1:00 pm
St. John the Evangelist Catholic Church, Hapeville, Georgia
Steve Kamiinski, II, age 65, of Atlanta, GA passed away Dec. 30, 2016. Surviving are wife; Denise Kaminski, sons; Stephen Kaminski, III, Jonathan Kaminski, Deven Cason, Tairyn Mosley, daughters; CJ Cason, Paisley Mosley, Elliana Cason. Funeral services will be held Saturday, Jan. 7, 2017 at St. John the Evangelist Catholic Church. Interment College Park Cemetery. The family will receive friends Friday evening from 5-8pm at Forest Lawn Funeral Home 5755 Mallory Rd. College Park, GA 30349.
------------------------------


From: Stephen Kaminski < sgkthree@gmail.com >  Date: January 3, 2017 at 11:38:16 EST  Subject: Steve Kaminski's Funeral
On behalf of my mother Denise and family, we would like to extend an invitation to attend the funeral of my father, Steve Kaminski. Please see the attached document for times and dates. Please let me know if you will be able to attend this weekend. If you are not able to join us, our family fully understands the business of this holiday season, so standby for additional words about Stevapalooza (retirement/memorial party at the Delta Museum) in the upcoming months.Thank you,
Stephen Kaminski III  ...  678-595-8296
Reception following: Candler Room at the Renaissance Concourse Atlanta Airport Hotel, where people will be able to join in fellowship, exchange stories and celebrate the life of Steve Kaminski
•This will be a fun event…light food, Budweiser and Jameson will be had by all
•A block of rooms will be available at the Renaissance
•Transportation: we are working on arranging transportation for Saturday, to help limit the need for a rental car (if outside the local area)
•Weather will be cold and potentially rainy….you can thank Steve for that
•In lieu of flowers, you can donate money to St Jude Children’s Research Hospital
-----------------------
His son wrote the following to some of his Dad’s best friends:
It's with great sadness I write to you today, but because you meant so much to my dad, I wanted to inform you that last night, he passed away at Emory University Hospital. According to my Mom, he was having trouble breathing while at home around 11AM and was taken to the hospital by ambulance. A short 12-hours later, he stopped breathing completely.
I know that he loved his job at Delta so much and the crews he flew with regularly, so much more. I thank you for all of the prayers and support you gave him these past few months...it truly meant the world to him. He told me over Christmas that he lived a long and happy life, that he had no regrets and that he was blessed to have seen and done all that he has.
I wish you and your family, a happy New Year!
His son,
Stephen Kaminski III