Passed away February 27, 2017. He was buried with full military honors at the National Cemetery in Sarasota Florida.

After David graduated from Shore High School in 1943 he enlisted in the Army Air Corps. He graduated pilot training at Miami Beach and then went on to B-25 combat training in 1944 where he flew combat until the end of WWII. In November 1946, he was released from active duty and immediately began his 4-decade Reserve career. With his new career came his first recall to active duty during the Berlin Air Lift (1948-49).

General Stanford earned his BA and Masters from Furman University in the late 1940's and early 1950's with additional graduate work at the University of South Carolina. While attending, he worked and flew for the newly formed United States Air Force during which time he was recalled a second time for the Korean War (1950-53).

After Korea, David began his civilian career with Northeast Airlines which merged with Delta Airline where he retired as a Captain. While flying commercially he was recalled to active duty multiple times during the Vietnam War (1955-1975) and once during the Cuban Missile Crisis in October 1962. Upon retiring from Delta David went to work for the FAA as an inspector and retired as the manager of the Miami offices of the FAA.

During David's career, he was the base commander at Homestead Air Force Base. In the 60's, he bought property in Key Largo and then built his home in 1972. The Keys drew him in with his love of sailing, fishing, and the water (The Keys Life). In addition to his home he was one of the Founders of the Upper Keys Sailing Club (1973).

David loved Life, Family & Friends. He is survived by his wife Bonnie Stanford, his sons David and Christopher Stanford, and his granddaughter Krista Stanford.

One last party for Dave will be held at the Upper Keys Sailing Club on July 8th at 4PM, located at 100 North Ocean Drive, Key Largo (Behind Burger King MM100) Please just come and visit. Nothing else is needed. 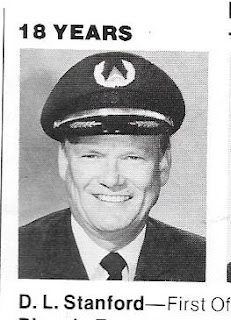 
usaf.pentagon.af-re.mbx.af-reg-workflow@mail.mil
Posted by death at 11:37 PM