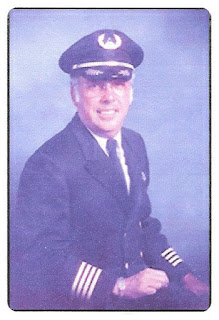 News has reached our group with the passing of Delta Golden Wings member retired Delta pilot Captain Jerry Eugene Duncan, age 84.  Captain Duncan joined Delta Air Lines 07-25-1960 and retired in 1992, based Ft. Lauderdale at time of retirement.  Friends and family will be gathering to celebrate his life on Monday, June 26th in Key West, Florida.
To view the obituary online and sign the guestbook, please visit
http://obituaries.bangordailynews.com/story/jerry-duncan-1932-2017-941808691
Thank you,
~ Carol for the PCN
Obituary......................................
Jerry Eugene Duncan, age 84, passed away June 16, 2017, in Miami, Florida. Jerry was born October 11, 1932, in Anderson, Indiana, to Fred and Mavis Duncan. He is survived by his children, Kevin Duncan, Kelly Moore and John, Keri McDaniel, Heather Mueller and Karl; grandchildren, Colt, Greyson, Taylor, Michael, Kinsey, Ashley, Shea, Spencer, Jared, Brendan, Evan and Hayden; and his sisters, Bev Almquist and Judy Muirhead. He was predeceased by his grandson, Gregory Moore. He graduated from Anderson High School in 1950 and continued his education at Ball State University in Muncie, Indiana, where he graduated in 1954. After college he joined the United States Air Force and served for 6 years, retiring as 1st Lieutenant in 1960. Immediately following, he was hired by Delta, where he enjoyed a 31-year career doing what he loved most ... flying. Memorial services will be held Monday, June 26, at 4 p.m. at his home in Key West, Florida. In lieu of flowers, the family requests donations be made in his name to Friends For Sight: www.friendsforsight.org