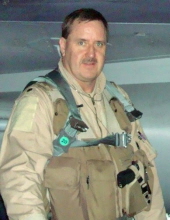 Ken was hired at Delta Air Lines in 1990, where he flew the Boeing 727, Boeing 737, and the Boeing 757/767. Ken was a Check Airmen on the 727, and had just recently been selected to serve as Check Airmen on the 757/767. Ken enjoyed skiing, boating, hunting with his brothers, going to the mountains, spending time with family and “pushing it up with the boys”.Ken is survived by his loving and devoted wife Susie, a close and loving family that includes his brothers Dave Donna), Rod (Pat), Tom (Chris), and Marlin, his three sisters Corrine (Jim), Rita (Craig), and Angie (Bob), a sister in law Marilee, a brother in law Jeff, an aunt Verna, an uncle Eugene and a multitude of nieces, nephews and cousins. Ken was a loving husband and devoted friend. Ken had a heart of gold, a big smile and a kind word for everyone he met, and is dearly missed.PLEASE HAVE ALL FLOWERS AND PLANTS DELIVERED TO CHERRY CREEK PRESBYTERIAN CHURCH. THANK YOU.
....as noted in ALPA publication...........................
Deceased Delta list as reported in the June/July ALPA magazine's In Memoriam column.