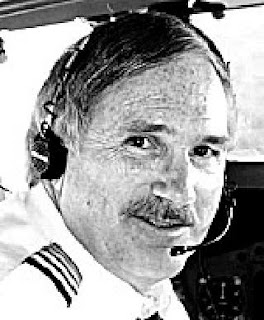 Word has reached our group with the passing of RNPA member retired Northwest pilot Captain Peter Edee Vinsant, age 82.  Captain Vinsant joined Northwest Airlines 10-19-1964.  He is survived by his wife Wendy, their children and grandchildren, plus many dear friends and other family members  To view/sign the online guestbook please visit
http://www.legacy.com/obituaries/name/peter-vinsant-obituary?pid=1000000186365937
Arrangements are not yet known.  Should more information be received we will be sure to pass that news along.
Thank you,
~ Carol for the PCN
Obituary..............................................
VINSANT, Peter Edee.....age 82, passed away Sunday, July 30, 2017 surrounded by family. He died peacefully in his sleep after fighting a three-month battle against lymphoma.
Peter "Pete" Vinsant was born on January 24, 1935 in Pawnee City, Nebraska, to Ray and Gwendolyn Vinsant.
He spent much of his childhood in Summerfield, Kansas, absorbing his father's passion for flying. After Shattuck-St. Mary's, he graduated from the University of Nebraska where he was a member of the Beta Theta Pi fraternity.
Peter served his country as an officer with the rank of Lt. Commander in the Navy and later the Navy Reserve for eight years, including two tours flying patrol bombers during the Cold War. In 1966, he was written up as a hero when he safely landed his military aircraft after the engines caught on fire, saving the lives of those onboard.
His career took him all over the world. For 31 years, Peter was a pilot for Northwest Airlines, retiring as one of the most senior Captains, flying the 747-400.
Peter married his wife, Wendy Vinsant, in 1977 and the two spent most of their 40 years together at their lake home in Wisconsin and their winter residence in St. Petersburg, FL.
He spent his spare time playing golf, boating, riding motorcycles, and horses, snow skiing, traveling the world, storytelling, volunteering at the VA hospital, playing with his dogs, and being a wonderful husband, father, grandfather and friend. He loved everyone and his infectious smile, kind heart and great sense of humor made it easy for everyone to love him back.
Peter is survived by his spouse Wendy Vinsant; children, Ron (Nancy) Vinsant and Diana (Bob) Davis; grandchildren, Michael (Christie) Davis, Stephanie Davis, Rachel Davis, Ivor Vinsant and Aris Vinsant; sister, Pat Hoffman, and many beloved nieces and nephews.
Peter was preceded in death by his parents, Ray and Gwendolyn; and daughter, Valerie Vinsant.
A burial service in Minnesota and a celebration of life in Florida this fall are pending. Memorials preferred to the Special Olympics of Florida (1915 Don Wickham Drive, Clermont, FL 34711) or the Special Operations Warrior Foundation (1137 Marbella Plaza Drive, Tampa, FL 33619).
.Published in the Tampa Bay Times on Aug. 13
----------------------------------------------
History....from newspaper dated July 15, 1966...  https://www.newspapers.com/newspage/65965325/
"We knew the runway was too short, but we got it down OK," said the pilot, Peter E. Vinsant, 31, of Burnsville, Minn., a lieutenant in the Naval reserve and a pilot for Northwest Airlines. He said the plane had taken off from the Minneapolis Naval Air Station for Willow Grove Naval Air Station just outside Philadelphia. "We were at 6,000 feet, about 20 miles from Lock Haven, when the left engine backfired and we had to shut it off," he said. "Five minutes later, it caught fire. "We knew we would have to land or bail out." Eight Escape Unhurt as Pilot Lands Flaming Plane on Too-Short Runway PHILADELPHIA (AP) -
https://www.newspapers.com/newspage/5650608/
LOCK HAVEN, PA., SATURDAY, JULY 16, 1966  SEARCHING FOR LOST PROPERTY - Members of the crew of the Navy Neptune which burned after making a forced landing at the Lock Haven Airport Thursday evening, searched the wreckage for their personal effects yesterday. They threw out their baggage before touching down, but the plane came to a stop where the baggage fell.
In the background is the home of the late William Raymond, which was in the path of the plane. (Express Photos) NAVY MEN who survived their forced landing here have continued on their mission, interrupted when their plane, en route from Minnesota to Willow Grove, made a forced landing here. The pilot, Lieut. Peter E. Vinsant talks with C.A.P. commander Gilbert Dean, at right. The other members of the crew are at left.
From: RNPA News    Sent: Sunday, July 30, 2017 6:48 PM   Subject: RNPA News: Pete Vinsant Has Flown West.
Denny Olden writes.

I just got notified by Wes Vermillion and Gary Webb that Pete Vinsant passed away this morning from complications of cancer.