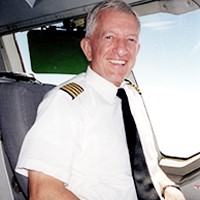 
Age 77 of Burnsville died peacefully with family at his bedside on September 16, 2017. A man of commitment, generosity, action, and fun, he will be lovingly remembered by his wife Barb; daughter and son-in-law Wendy Rehwaldt Haagenson and Rick Haagenson; son and daughter-in-law Denver Gilliand and Nicole Gilliand; grandchildren, Kelsey Heeren (Tom), Seth Rehwaldt, Sutton Rehwaldt (Annalise), Sawyer Haagenson, Hailee Gilliand, Mason Gilliand, and Kiya Gilliand; former wife Reba Gilliand Haukebo (Craig); former son-in-law Greg Rehwaldt; stepgranddaughter Kristin Haagenson; niece Deanna Vargas (Rod), nephews Dane Williams (Penny) and Eric Williams, extended family, and many cherished friends. He was devoted to his family, his church, and his much-loved career as a pilot for Northwest Airlines for 33 years. Prior to starting with Northwest, he pursued his education in Tennessee, served 5 years as a B-52 navigator in the Strategic Air Command and 1 1/2 years as a C-124 navigator. After his service to his country, he continued his education, took flying lessons, and then gave flying lessons before starting with Northwest in 1967. For years, he supplemented his career at Northwest with a tax preparation business. He also devoted countless hours to his church, mainly as its treasurer and general handyman, but in many other ways, as well. He was generous in his support of people and institutions he believed in. In his leisure time, he pursued his many enjoyments meals with family and friends, travel, scuba diving off Key West, bicycling and hiking with Barb, ping pong, tennis, golf, crosswords, games of Trivial Pursuit, gin rummy, dominoes, poker, reading (especially history of the Civil War and the US space program), singing and playing the guitar with his group "Zenith Avenue," listening to music, joking with friends, rooting for the Minnesota Vikings, and assembling countless jigsaw puzzles. His family is grateful to the staff at Eagan Pointe Senior Living and Kindred Hospice for their devoted care. A celebration of Jerry's life will be held on October 5 at 4 PM at Washburn-McReavy Werness Brothers Chapel, 2300 W. Old Shakopee Road, Bloomington, MN 55431. Those unable to make it to the service are encouraged to join the rest of us at approximately 5 PM for the meal and visits with family. Memorials are preferred to the Alzheimer's Association or Minnesota Valley Unitarian Universalist Fellowship.
Posted by death at 11:12 PM