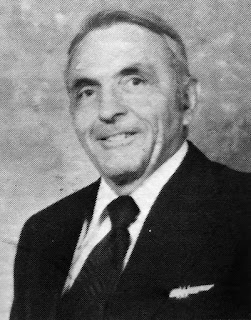 News with the passing of an aviation pioneer, WWII veteran and RNPA member, retired pilot Captain Frank Joseph ‘Joe’ Buskirk, just shy of his 98th birthday.  Captain Buskirk began his commercial flying career 05-25-1946, survived the various mergers and retired with Hughes Airwest.  Widowed January 1st, 2016 with the passing of his wife Ellen, Joe is survived by their children, their grand- and great grandchildren.  Joe & Ellen had most recently resided in Redmond, Washington.
Thank you,
~ Carol for the PCN
Obituary...........
Captain F. Joseph Buskirk (Hughes Air West, ret.) died peacefully on November 9th in Redmond WA, one month short of his 98th birthday.
Joe was born Frank Joseph Buskirk on December 6, 1919, in Montrose, CO.
Always a hard worker, he was proud to have had a paper route (age 5), served as an Alter Boy at St. Mary’s Catholic Church & worked at Anderson’s drug store for much of his school years. Mr. Anderson was instrumental in Joe attending the University of Colorado studying to become a Pharmacist.
Just prior to the outbreak of WWII, he was selected for Naval Cadet Flight Training in Pensacola FL, earning his wings in February 1942. Before he was sent for the 1st of 3 tours to the Aleutian Islands in AK as a PBY Patrol Pilot, he met Ellen Erixon at a “Tea Dance” at San Diego NAS. On February 25, 1943, Joe & Ellen were married & celebrated 72 years together.
After his discharge from the Navy, he was hired by Zimmerly Air Transport flying the B-247. Through the years he survived the mergers with Empire Airlines, West Coast Airlines, Air West & Hughes Airwest, retiring #1 on the Pilot Seniority List as a B-727 Captain.
Joe was preceded in death by his wife, Ellen, & his daughter-in-law Kathy (HAW Flight Attendant). He is survived by his 3 sons, Dale & wife Gerda of Glendale AZ; Dan (HAW & NWA Pilot) & wife Susan of Scottsdale AZ; David of Laguna Niguel CA; & their 8 grandchildren and 13 great-grandchildren.
He was a wonderful husband, father, and man and will be greatly missed.
---------------------
In Memory of Ellen BUSKIRK
September 11, 1920 - January 1, 2016
From: Tom Bailey  Sent: Tuesday, November 28, 2017 5:51 PM  Subject: Joe Buskirk