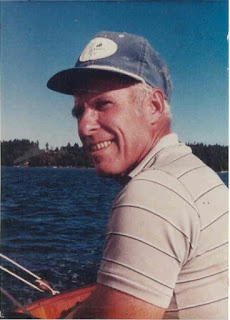 Word has been received with the passing of RNPA member retired Northwest pilot Captain James ‘Jim’ Wainwright, age 92.  Captain Wainwright joined Northwest Airlines 07-26-1949.  He is survived by his wife Dorothy, their children plus grand- and great grandchildren.
Please see obituary information below....memorial services are planned for this Friday December 22nd in Gig Harbor, Washington.
To view/sign the online guestbook please visit the funeral home website at
http://www.havenrest.com/notices/James-Wainwright
Thank you,
~ Carol or the PCN
Obituary................
James (Jim) Eyre Wainwright
James Eyre Wainwright, born on May 1, 1925, passed away surrounded by family on December 15, 2017.
Jim was born to Eyre Bennett and Susan Katherine Wainwright in Whittier, CA. Jim grew up in Butte, Montana and graduated from Butte High School in 1943. Flying had always been his dream, and along with his twin brother John, he enlisted in the Army Air Corps cadet program and was activated in July 1943. He graduated flight training in September 1944, and transitioned to flying B-17s. He was assigned to the 92nd Bomb Group stationed in Poddington, England. He became fully operational after VE Day, but remained in Europe and North Africa ferrying troops heading home. In July 1949 Jim was hired by Northwest Airlines. He started out his commercial career flying the DC-3 and retired after 36 years as a captain flying the 747. In all, he logged 24,000 hours of flight time. He met his wife Dorothy, a flight attendant with Northwest, in November 1951, and they were married on October 11, 1952.
Jim was a skilled woodworker, which included building several boats, an avid golfer, and a fan of the Mariners. He was very active in the Knights of Columbus and was a 4th degree knight. Jim made 92 look young. He passed his love of airplanes, boats, and woodworking to every member of his family, treasured his beloved wife, loved his family and others deeply, walked a life of faithfulness and integrity, and demonstrated a servant’s heart. His family is comforted to know that he is enjoying the presence of Jesus.
Jim was preceded in death by his father and mother, his twin brother John, and his younger brother Tom. He is survived by Dorothy, his wife of 65 years; sons Don (Susan), Mitch (Valerie), Dan (Anne), and daughter Kathy (Bob) Shaw; seven grandchildren Jim (Rebecca) and Eric Wainwright, Bennett, Baylee, and Abby Wainwright, Katie and Jamie Shaw; and two great grandchildren, Kate and James Eyre III; as well as his youngest brother Gene.
Funeral services will be held at 10 a.m. Friday Dec. 22 at St. Nicholas Catholic Church in Gig Harbor. Interment will be at Haven of Rest Cemetery, Gig Harbor.
From: RNPA News   Sent: Monday, December 18, 2017 12:39 PM   Subject: Jim Wainwright Has Flown West.

James Wainwright was 92 years old and was hired by NWA on July 26, 1949. He retired on April 30, 1985 and was a RNPA member. Special thanks to Ralph Christ for the advanced information.