~ IN MEMORY ~
Military veteran, Pacific/RC (NWA) Capt. Harry H. Spear Jr.
May 11, 1922 ~ November 11, 2017
Belated news with the passing of WWII veteran retired Republic Airlines pilot Captain Harry H. Spear, age 95.  The Pacific Airlines roster indicates a hire date of 08-20-1948 for Captain Spear.  Should more information be received we will be sure to pass it along.
Thank you,
~ Carol for the PCN 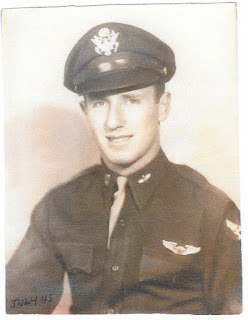 Harry was born in San Francisco and raised in Berkeley, CA.
He enlisted in the Army Air Corp in 1942 and flew B-25’s in World War II with the
57th Bombardment Wing, 12th Air Force, in the European Theatre.

As an Air Force Reservist he served as a transport pilot with the Military Airlift Command.

While with Hughes Air West, he hired staff for their Federal Credit union
and served several years on their Board of Directors.
He also worked on committees at the ALPA.

Although he played the drums in his teenage years, he picked up the banjo after retiring
and played in several banjo bands in and around the San Francisco Bay Area.

He and his wife, Dorothy, moved to Palm Desert, CA in 2001.
For several years thereafter, they traveled while Harry pursued his hobbies.
His health began to decline in 2009 and he died at home on Veterans’ Day 2017.