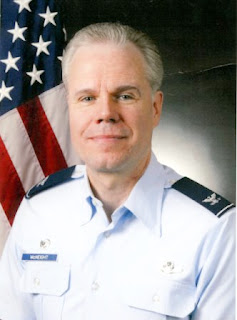 Word has reached us with the passing of ret. USAF Colonel and retired Delta pilot Captain Kevin Joseph McNeight, age 59.  Colonel McNeight joined Delta Air Lines 10-14-1988.  You can read more of Colonel McNeight’s aviation career at https://airandspace.si.edu/support/wall-of-honor/col-kevin-joseph-mcneight-usaf
Colonel McNeight’s obituary has not been posted online yet but we understand that Carmichael Funeral Home of Smyrna, Georgia has been entrusted with arrangements http://www.carmichaelfuneralhomes.com/  Phone: (770) 435-4467.
All available information appears below and as more news is received we will be sure to pass it along.
Thank you,
~ Carol for the PCN
Service arrangements and celebration of life event:
Celebration of Life Details for Kevin McNeight
One more note:  The family is asking folks to wear their service dress if possible.
- Open house for viewing Kevin's aviation collection Sat 2-5 and/or Sunday 1-4 (at our home)
3536 Preserve Dr SE , Atlanta GA 30339
- Funeral Home Viewing/Rosary:  Carmichael Funeral Home/(Smyrna location)
2950 King Street , Smyrna GA 30080....(770) 435-4467  Sunday 5-8pm.
- Procession from funeral home to Cathedral: 9am Monday (optional)
- Funeral Mass:  Cathedral of Christ the King - 10 am Monday, March 19th
2699 Peachtree Rd NE , Atlanta GA 30305  ...  (404) 233-2145
- Lunch reception immediately following service:  Delta Flight Museum
Jet Age Hangar  (Adjacent to Delta Headquarters, near Atlanta Hartsfield-Jackson Airport)
1060 Delta Blvd, Bldg B  , Hapeville, GA 30354  ...  (404) 715-7886
- Military burial ceremony at Arlington National Cemetery, Washington, DC at date TBD
----------------------------------------
Career information............................. https://airandspace.si.edu/support/wall-of-honor/col-kevin-joseph-mcneight-usaf
Colonel Kevin McNeight is a Command Pilot with more than 10,000 military and civilian hours. He has served as the Commander of the 700th Airlift Squadron from April, 2004 to present. The 700th is the only C-130 Formal Training Unit in the United States Air Force Reserve and is responsible for the formal training of pilots, navigators, flight engineers and loadmasters from Active duty, Air Reserve and Air National Guard units throughout the country who directly contribute to the Global War on Terrorism.
Colonel McNeight earned his Bachelor of Science degree in management as well as his commission as a second lieutenant from the Air Force Academy in 1980. He earned his pilot wings at Reese Air Force Base, Texas in 1981. After completing initial C-130 pilot training, he was assigned to the 774th Tactical Airlift Squadron at Dyess Air Force Base, Texas. After upgrading to instructor pilot, he was assigned to the 16th Tactical Airlift Training Squadron at Little Rock, Arkansas. He transitioned to the Air Force Reserve and joined the 700th Airlift Squadron at Dobbins Air Reserve Base in 1989. After serving in several Group and Wing level jobs in the 94th Airlift Wing at Dobbins Air Reserve Base, Lieutenant Colonel McNeight became the 700th Airlift Squadron Commander in 2004.
Colonel McNeight is also a Captain for Delta Air Lines, where he has been employed since October, 1988. There he has flown the Boeing 727 and the McDonald Douglas MD88. He has also worked in Delta’s training department for seven years as a Senior Instructor for B727 Second Officers, three years for Delta’s Fuel Conservation Program, one year as a B727 Second Officer Simulator Instructor and one year as Second Officer Line Check Airman.
He flew the B727, his favorite airliner, for Delta until the airline discontinued its operation and has flown the C-130 aircraft for the Air Force his entire military career. In Air Force training, he also flew the Schweitzer Glider, T-41, T-37, and T-38.
He grew up in the small town of Stratford, Wisconsin and is the son of the late Allison and Adella McNeight. He earned the designation of Eagle Scout as a young man and the honor of appointments to both the Air Force and Naval Academies. He knew that he wanted to be a pilot since he was eight years old and has been blessed to be able to live his dream.
-----------------------------------------
CARES AND CONCERNS
Thank you to retired LTC Mike Manning for forwarding the sad message below of the death of former 700 AS Commander, and retired Delta Captain, Colonel Kevin J. McNeight, 59.  He was born 8/20/1958 and was hired by Delta 10/14/1988.
You may view or sign the online Guest Book at http://www.legacy.com/funeral-homes/georgia/smyrna/carmichael-funeral-homes---smyrna/fh-3466    I will send an obituary when it is printed.
Dave
-----Original Message-----
From: CHRISTIAN, MICHELLE C CIV USAF AFRC 22 AF/CCA  Sent: Sunday, March 11, 2018 3:19 PM
Subject: Funeral Arrangement for Col Kevin McNeight
One more note:  The family is asking folks to wear their service dress if
possible.
Thanks again,
Michelle
-----Original Message-----
From: CHRISTIAN, MICHELLE C CIV USAF AFRC 22 AF/CCA Sent: Sunday, March 11, 2018 11:11 AM  Subject: Funeral Arrangement for Col Kevin McNeight
I am saddened to inform you that Col Kevin McNeight passed away yesterday, 10 March 2018, at 0100.  He had been fighting a health issue for years.  The funeral arrangements are on Monday, 19 March 2018, at 1000, at the Cathedral of Christ the King in Atlanta, GA.
Thank you,
Michelle Christian, Civ, DAF
Executive Assistant, 22 AF
Posted by death at 1:23 PM