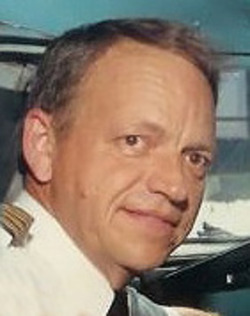 Notification with the passing of retired Northwest pilot Captain Hal Gerard Wick, age 73.  Captain Wick’s obituary notes he began his commercial flying career with North Central in 1972 and retired with Northwest Airlines in 2004.
To view/sign the online guestbook please visit  http://www.millerfh.com/memsol.cgi?user_id=2080820
also   https://www.legacy.com/obituaries/argusleader/obituary.aspx?n=hal-wick&pid=188409542
For those wishing to send a personal note to the family, whitepages lists a home address of
3009 W. Donahue Drive, Sioux Falls SD 57105-0153.
Thank you,
~ Carol for the PCN
Obituary........................
Hal Wick , 73, peacefully passed away with his family present on March 8 at Sanford Hospital after a well-fought battle with cancer. He was born on October 31, 1944 to Roland T. and Esther (LaFontaine) Wick in New Ulm, MN. His family moved to the Cathedral District of Sioux Falls where he attended St. Joseph Cathedral School and then graduated with the first senior class at O'Gorman High School in 1962.
While attending SDSU, he fell in love with flying. Hal served in the Air National Guard for 24 years, where he trained as a Fighter Pilot in the F-100, and A7 planes, was a C-131 and C-12 flight instructor and Chief of Command Intelligence Division. Hal retired in 1994 as a Lt. Colonel. In addition to serving with the SDANG, Hal lived out his career dream as a commercial airline pilot, beginning with North Central Airlines in 1972, and retiring in 2004 with Northwest Airlines.
Passionate about our country, he served the people of South Dakota as a State Representative for 20 years, spanning five decades. He was an active member of the American Legislative Exchange Council (ALEC). Hal spent many years working on a Balanced Budget Amendment for the United States. This is work of which he was incredibly proud.
Hal was active at Christ the King Catholic Church, the Sioux Falls Catholic Schools, and with the Knights of Columbus. He was also a member of several organizations throughout his life, including Hartford Lions, Sioux Falls Downtown Lions, National Guard Association of the United States, American Legion Post 15, and the Sioux Falls Regional Airport Board.
His faith and family were truly his greatest passions. Hal married Jane Rance on September 4, 1965. He and his wife of 52 years were blessed with four children: Daughters Anne Nelson, Paula (Dan) Hagen, and Betsey Wick (significant other, Dave Carlson) all of Sioux Falls, and Son, Ross Wick (fiancé, Aja Jackson) of New Haven, CT. He dearly loved his grandchildren: Karin (Kyle) Brashler, Sioux Falls, Ellen Nelson, Minneapolis, MN, Hannah Valentine, James Nelson, and Samuel Hagen, Sioux Falls, and great-grandson, Benny Brashler, Sioux Falls. Hal was preceded in death by his parents and sister, Mary Kaye Fatland, and nephew Todd Fatland.
Open visitation will be on Monday, March 12 at Miller Funeral Home, Downtown, with family present at 5:00 PM, and Scripture Vigil at 7:00 PM. Mass of Christian Burial will be Tuesday, March 13, 10:30 AM at Christ the King Catholic Church. In lieu of flowers, the family encourages memorials to be directed to the Sioux Falls Catholic Schools or Christ the King School Building Projects.
The family wishes to express sincere gratitude to Sanford USD Medical Center and the Sanford Cancer Center for the care provided to their husband and father.
www.millerfh.com