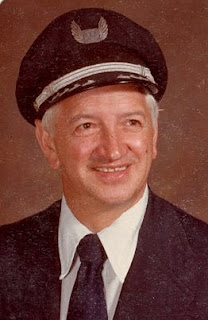 Notification with the passing of retired Pacific Northern/Western pilot Captain Al Ticknor, age 85.  Captain Ticknor joined Pacific Northern Airlines 03-28-1960 and retired with Western Airlines, based SFO & SEA.  He is survived by his wife Meady, their children plus grand- and great grandchildren.
To view/sign the online guestbook please visit https://www.dignitymemorial.com/obituaries/seattle-wa/albert-ticknor-7829575
Memorial services for Captain Ticknor will be held tomorrow April 27th at Yarington's/White Center Funeral Home located at  10708 16th Ave. SW, Seattle, WA.  Please see information below.
Should more news be received we will be sure to update our memorial site.
Thank you,
~ Carol for the PCN
Obituary..........................Albert Bruce Ticknor, Sr.
Albert (Al) Bruce Ticknor Sr. passed away Friday, April 20, 2018 in his Seattle home. He was 85. Albert was a devoted husband, father, grandfather and friend. He is remembered for his trailblazing sense of adventure as a pilot, outdoorsman, farmer, tinkerer, maker & world traveler. Albert was born Oct. 8, 1932 in Centralia, WA, to Ada and Everett Ticknor. He grew up working with his family on a farm & dairy. Albert was the second of seven children. He played varsity baseball at Centralia High School until graduating in 1950. Albert met Meady Bernice Ticknor (nee Arrowsmith) at their high school candy shop, became sweethearts & were married Aug. 31, 1952 in Centralia. They were married 65 years.
Albert served in the Naval Air Reserve from 1951 to 1959. In addition, he worked as a farmer to put himself through Centralia Community College. From 1957 to 1960, he worked for Boeing Co. on 707 production in Renton, WA. In 1960, Albert became a Airline Transport Pilot for Pacific Northern Airlines in Anchorage, Alaska. Pacific Northern later merged with Western Airlines and Albert flew with Western for 25 years retiring as a captain in 1985. Albert, Meady and their three children lived in Anchorage until 1968. He built their home in the Spenard neighborhood of Anchorage, and his family survived the Great Alaskan Earthquake of 1964. His three children remember him as an adventurer who took them hiking, camping, fishing, boating and on flying excursions in a Cessna 170 that he rebuilt himself.
In 1968, Albert and family returned to Seattle where he resided until his death. Albert was an original Seahawks season ticket holder. He was an avid sports enthusiast, playing baseball in high school, college and as a young adult. He loved golf and enjoyed watching sports of all kinds. Albert was a loyal friend, inspiring lifelong relationships with neighbors and colleagues. For decades, he rarely missed the Monday Lunch Bunch meetup with his aviation associates at the Sizzler near Southcenter Mall. He was a member of Quiet Birdmen (QBs) fraternal organization, Freemasons, Studebaker Club and Antique Studebaker Club. Albert restored two antique Studebaker cars in his retirement. He also developed a love for the arts, learning to play the organ in the late '80s and later dabbled in drawing and painting. He always had a green thumb and tended a well-cared-for garden of flowers, strawberries and vegetables. He traveled the world with his wife via cruise ships to Europe, the Panama Canal, New Zealand, Australia, Iceland, Russia and the Mediterranean. His grandchildren fondly remember fishing trips with him to Petersburg, Alaska, and camping road trips around the United States and Canada.


Albert is survived by his wife Meady; daughter Cecily and husband Dave; son Albert Jr. (Butch) and wife Debra; and daughter Carol and husband Jim. Albert has nine grandchildren, nine great-grandchildren and another expected in May this year. He was preceded in death by grandson William. There will be a memorial and celebration of life at 1:00 p.m. Friday, April 27 at Yarington's/White Center Funeral Home, 10708 16th Ave. SW, Seattle, WA. A reception will follow at the same location.
Posted by death at 1:28 PM