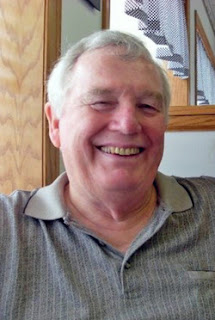 Word has been received with the passing of retired Northwest pilot Captain James Russell Jones, age 77.  Captain Jones joined Northwest Airlines first as a mechanic 07-10-1964.  He is survived by his wife Judy, their children and grandchildren, plus many other family members.
To view/sign the online guestbook please visit the funeral home website at
http://www.eidsnessfuneralhome.com/memsol.cgi?user_id=2123293
Obituary may also be viewed online at
https://brookingsregister.com/article/james-r-jones-brookings
Services for Captain Jones were held yesterday in Volga, South Dakota.
Should more information be received we will be sure to pass it along.

Thank you,
~ Carol for the PCN
Obituary......................
James R. Jones, age 77, of Brookings, passed away, Saturday, July 21, 2018, at the Brookings Hospital. Memorial services will be 1:00 P.M. Wednesday, July 25, 2018, at First Lutheran Church in Volga. Visitation will be one hour prior to the memorial service at the church. Eidsness Funeral Home is handling the arrangements.
James Russell Jones was born May 9, 1941 in New Castle, PN where he grew up with his brother and three sisters. He graduated Union High School in New Castle, PN in 1959. Afterwards, he joined the Air Force where he worked as a mechanic/crew chief on B-52 Strato Fortress (Bombers) from 1959-1963.  After being discharged in 1963, he went to Pittsburgh Institute of Aeronautics for further mechanic training.  In 1966, he was hired by Northwest Airlines as a mechanic and shortly after attained his commercial pilot license. Jim met his first wife, Marilynn Horn and had two sons, James and Christopher Jones. After his first marriage ended, he met his future wife, a flight attendant, Judy while working together at Northwest Airlines.
Over the course of his 35 year career with Northwest Airlines, Jim had the opportunity to travel the whole world seeing many exotic places. He also volunteered to join the Civil Air Patrol mission that was organized to fly and support the Operation Desert Shield mission during the Iraq/Kuwait War.
Judy and Jim settled in Mora, MN and had their first daughter Kathryn Jones.  Later they moved to a farm outside of Volga, SD, where they had their second daughter Kimberly Jones. While continuing his career as an airline Capitan, he also raised, pigs, cattle, donkeys, an assortment of poultry, and reindeer on the farm in Volga. After a few years, Jim and Judy decided to continue growing as a family, moved into town, and became foster parents. Later they added Zachariah Jones and Macey Blum to their family.
In  1999, Jim and Judy opened Big Sioux Aviation where he and his team of instructors including his son Jim helped teach students in the community how to fly airplanes. He and his son Jim coached the Big Sioux Aviation Softball Team which his daughters played for and enjoyed making sure his team was well taken care of. Jim officially retired in 2001 as a captain on the 747-400.  During his retirement, Jim enjoyed spending his time with his wife, kids, and grandchildren.  He loved to watch Fox News and c-SPAN to see “what the Democrats were up to” and enjoyed a good political debate. He enjoyed watching western movies, volunteering at the Volga Christian School, and watching his granddaughter, Leah.
Jim lost his 25 year long battle with Prostate cancer on July 21, 2018. He passed surrounded by family. He is survived by his wife, Judith Jones (Fjeld); his children James (Autumn) Jones, Christopher Jones, Kimberly Brendsel, Zachariah Jones, and Macey Blum; his grandchildren, Trevor Jones, Kami (Orin) Flaherty, and Leah Brendsel; his sisters, Daisy Pullen, Brookfield, OH, Ramona Jordan, Millbrook, AL, Rebecca (Tom) Neal, New Castle, PA; Brother-in-law, Dean (Mavis) Fjeld, Moorhead, MN; Sister-in-laws Dorean (Bill) Halonen, Punta, FL, Jane Erickson, Duluth, MN and many nieces and nephews.
He is predeceased by his parents Charles Jones and Charlette Glenn-Jones, his daughter Kathryn Jones.
---------------------------