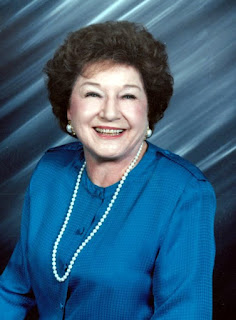 Notification with the passing of Delta Golden Wings member Mary ‘Louise’ Elliott, age 92.  Louise was the widow of DL Captain R. G. ‘Roscoe’ Elliott who passed in December 2016.  She is survived by their daughters and grandchildren plus many other family members and friends.
To view Louise’s obituary online please visit the funeral home website at
https://www.dignitymemorial.com/obituaries/colleyville-tx/mary-elliott-7968069
also available online at
https://www.legacy.com/obituaries/dfw/obituary.aspx?n=louise-wiggs-elliott&pid=190041903&fhid=17325
Services for Louise were held August 24th in Colleyville, Texas....please see below.
Should more information be received we can then pass it along.
Thank you,
~ Carol for the PCN
Obituary.......................Louise Wiggs Elliott of RICHLAND HILLS --
Louise Wiggs Elliott, 92, beloved mother and grandmother, passed away peacefully Tuesday, August 21, 2018.
CELEBRATION OF LIFE: 12:30 p.m., Friday, August 24 at Bluebonnet Hills Memorial Chapel, 5725 Colleyville Blvd., Colleyville.
MEMORIALS: Donations may be made to Richland Hills Baptist Church. Louise was born in Chalybeate, Miss., on September 14, 1925 to parents Earl Marcus Wiggs and Myrtle Meeks Wiggs. She graduated in 1943 from Chalybeate High School where she was valedictorian of her class. Upon graduation, she attended Blue Mountain College in Miss. On June 21, 1946, she married the love of her life R.G. ";Roscoe"; Elliott, also from Chalybeate. They began their married life in Fort Worth with Roscoe working as a pilot for Delta Air Lines and Louise as an executive secretary. In 1953, the Elliotts moved to Richland Hills, where they raised their two daughters. Louise was an active and dedicated volunteer in the Richland Hills community. When her daughters were young, she volunteered in PTA and Camp Fire Girls. She was a longtime, faithful member of Richland Hills Baptist Church and served as church hostess, Sunday School worker, and most recently, greeter. She also taught a ladies exercise class for over 20 years at Richland Hills Community Center and was chosen volunteer of the year. Louise is preceded in death by her parents, her husband of 70 years, R.G. Elliott, and her brother, Earl Marcus Wiggs, Jr. The family would like to express their sincere appreciation to Louise's compassionate caregivers from Care Serve Private Duty.
SURVIVORS: Louise is survived by her daughters, Barbie Adair and husband, Jay, and Donna Mowdy and husband, Danny; granddaughter, Shelbi Goodman and husband, Charlie; sister Jean Ketchum and extended family and friends.
---------------------