~ IN MEMORY ~
NWA/DL Capt. Thomas Robert Niederer
October 19, 1958 ~ August 2, 2018
News has reached our group with the passing of Northwest/Delta pilot Captain Thomas ‘Tom’ Robert Niederer, age 59.  Captain Niederer joined Northwest Airlines 11-09-1984 and continued his career with Delta Air Lines.  He is survived by his wife Jan, their children and grandchildren, plus many other family members and friends.
To view/sign the online guestbook please visit the funeral home website at
https://www.washburn-mcreavy.com/obituaries/Thomas-Niederer/
If more information is received, we will be sure to pass it along.
Thank you,
~ Carol for the PCN
From: RNPA News Sent: Sunday, August 12, 2018 12:23 PM   Subject: RNPA News: Tom Niederer Has Flown West. 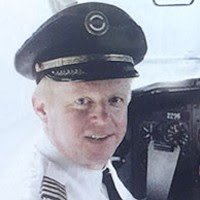 Niederer, Thomas Robert "Tom" Age 59 of Apple Valley died unexpectedly on August 2nd, 2018. Tom grew up In Bloomington where he graduated from Jefferson HS and UND School of Aviation. He was employed by NWA/Delta airlines. Preceded in death by brother Jim. He is survived by his wife Janet; sons Bobby and Jacob; daughter Claire; parents Bob and Diane Niederer; sister-in-law Kate Niederer; brother John (Chris); sister Suzanne Slattery (Matt Kuusisto); many nieces and nephews; and other relatives and friends. Tom had many interests: sports, classic cars, airplanes and boats. His greatest joy was spending time at the cabin with his family whom he adored. He will be remembered as a loving and compassionate caregiver, a generous husband and father, and friend to many. Memorial service will be held on Friday, Aug. 10, 2:00 PM at Normandale Hylands UMC, 9920 Normandale Blvd., Bloomington. Visitation beginning at 12:30 PM to service time. In lieu of flowers, memorials preferred. Washburn-McReavy.com Werness Brothers 952-884-8145
Published on August 5, 2018