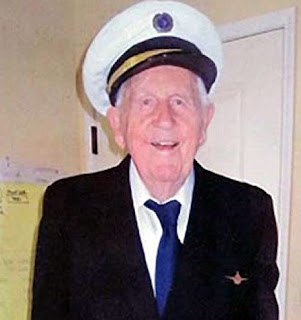 News has reached us with the passing of early Pan Am pilot Captain Leslie Carlye Brissette, nearing his 103rd birthday at the time of his passing on Sunday evening August 26th.  Online memories and condolences may be shared at

https://www.dignitymemorial.com/obituaries/san-diego-ca/leslie-brissette-7974892
Funeral Home Services were entrusted to El Camino Memorial, Sorrento Valley & El Camino Memorial Park of San Diego, CA. (858) 453-2121  Note that the funeral home had incorrectly dated Captain Brissette’s death as August 2nd....I’ve contacted the funeral home and they are in the process of making a correction to their mistake.  Captain Brissette was widowed in 2010 with the passing of his wife Lilo.  https://www.legacy.com/obituaries/name/lilo-brissette-obituary?pid=143977791
Captain Brissette was also predeceased by his son Leslie Jr. who perished in 1976
https://www.findagrave.com/memorial/411204/leslie-c-brissette
The funeral home tells me that no services were planned and no full online obituary is available, but I did find a Pan Am newsletter article from the year 2015 noting Captain Brissette’s 100th birthday and his life story...please see below.
Thank you,
~ Carol for the PCN
Clipper Pilot Les Brissette Celebrates 100th Birthday
by Pat MacKay
https://nanopdf.com/download/above-and-beyond-pan-am-historical-foundation_pdf
September 29, 2015 marks the 100th birthday of Captain Leslie C. Brissette.  Always sunny and optimistic, Les has a funny rejoinder ready for any question or quip. He goes armed with a pocket full of jokes to keep any crowd laughing -- whether it’s the churchgoing ladies or the bridge playing guys.
He’s the toast of the dining room at the Vi at La Jolla where he moved about 5 years ago. Who can resist the charm of a Sky God bearing bottles of carefully curated wine to dinner? Great way to make friends!
Born and brought up on a farm in Saranac, New York, Les declares that he “didn’t see much future in farming and it sure wasn’t paying” so he took a temporary Civil Service job with the 1940 census.
With WWII on the horizon, the government set up seven “free” flight training schools around the country and Les was assigned to what he refers as “Parkersburg, West-By-God Virginia” and started training on the UPF 7. “Very maneuverable” he recalls. Then he transferred to Northeastern’s flight school in Burlington Vermont where PAA came recruiting.
Next stop, 4th officer on the Flying Boats out of Miami (where he claims his job was sorting US Mail) , then the Boats out of La Guardia to Lisbon. Back to Miami, on to Panama and then to the IGS. Like many of the IGS pioneers he and his family started out living in England but ultimately moved to Berlin where he retired in 1975.
Then, Les and his wife Lilo began a new career of adventures. It included 270,000 miles in a mo-bile home, residences around the country and a ranch in Colorado before they settled down in the San Diego area favored by many of the pioneer pilot crew.
He stays in regular touch with a number of the old PAA gang in-cluding Dewy Hoffman, John Bell, Bill Box, Bill Nash, Richie Stewart, Clipper Pilot Les Brissette Celebrates 100th BirthdayBy Pat MacKaywidow of Charlie Stewart, and Gudy Barnholt, widow of Barney Barnholt.
Comfortably ensconced at the Vi in La Jolla, Les goes out for lunch most days and keeps them laughing in the dining room in the evening. Family, friend — and with a bit of luck some of the PAA gang — are planning a series of celebrations of Les’ first triple digit birthday. With his trademark sense of humor, Les attributes his lon-gevity to a diet of “beer and bacon on a daily basis.”
----------
Pat MacKay, daughter of Clipper Pilot Tom MacKay, has known Les since her first trip to Berlin in 1958. Tom and Les first met during WWII in a layover barracks on the Africa routes and always stayed close. Tom went on to follow Les to Panama and then to Berlin. Tom retired flying the 747s out of LAX in 1980.
------------------
Wife Lilo obituary...............BRISSETTE, LILO C.
Lilo C. Brissette, born on October 15, 1926, died on July 3, 2010, after a long illness. Born in Koln, Germany, she immigrated with her parents to Canada; back to Germany at the beginning of World War II. She worked as Hospital Secretary with the American military in Wiesbaden. Took a tour of East Berlin where we met, dated and married in Woking, England, over 53 years ago.
------------------------------------------------

Subject:  Les Brissette’€s Final Flight
................... he was in a nursing/retirement community in La Jolla in the years when I caught up with him again at 100.  His family was gone.  He had one son who was a 141 plane commander in the Air Force.  That is until he crashed in Newfoundland with all lost.  I’m sure that you remember the accident. Less was a skipper on the 727 in Berlin when he retired.  That is where I flew with him.  There isn’t much else to tell.  He is one of the last if not the last of the old boat skippers at Pan Am.  The end of an era.  All the best, Dave.  Denny

..... Sadly it is time to remove number two from your list….  Les Brissette a truly great guy has flown West.  He passed on the 26th.  Pat MacKay, address below, looked after Les’€™s affairs.  Her Dad was a Pan Am Captain also who passed a long time ago.  He was a good buddy of Les.   Thanks for adding Les to your list.  He was bright and cheery right up to his passing.  Dennis