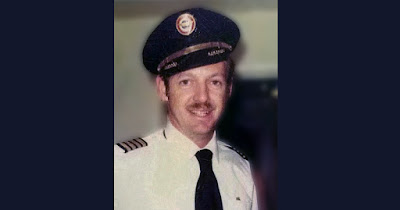 Word has reached our group with the passing of RNPA member retired Northwest pilot Captain Barry Worth James, age 85.  Captain James joined Northwest Airlines 05-16-1959.  He is survived by his wife Treva, their grand- and great grandchildren, plus many other friends and family members.  Services are planned for Friday, November 30th in Minnesota.
To view/sign the online guestbook please visit the funeral home website at
https://www.ballardsunderfuneral.com/barry-worth-james/
Captain James’ obituary may also be viewed online at
http://www.startribune.com/obituaries/detail/0000285463/
Please see all service arrangements below.
To the best of my knowledge, personal condolences may be sent to the family at
3147 Linden Cir NW , Prior Lake MN 55372-1608.
Thank you,
~ Carol for the PCN
Obituary..........
Barry Worth James, age 85, of Prior Lake, formerly of Red Lodge, Montana, passed November
23, 2018. A Celebration of Life will be held on Friday, November 30, 2018 at 11AM with a
visitation 30 minutes prior, all at Ballard-Sunder Funeral Home, 4565 Pleasant St. SE, Prior
Lake. There will be a gathering at the Prior Lake VFW immediately after the service. Barry will
be laid to rest at Fort Snelling National Cemetery.
In Portland, Oregon on April 17, 1933 Barry was born to parents Jesse and Sue James. In his
youth, Barry had an adventurous spirit—exploring his grandparent’s apple orchard and riding his
horse to school.
Following his high school graduation, Barry continued his education at Portland State before
enlisting in the United States Air Force. Employing his knowledge and enthusiasm for flying,
Barry began a lifelong career as a pilot. For 33 years, Barry was a pilot with Northwest Airlines.
While at work Barry crossed paths with another employee, Treva Garrison. The two eventually
began dating and were married on March 16, 1974 in Kilkenny, MN. Their marriage was blessed
with 44 years together.
In his free time, Barry enjoyed the outdoors—a pastime he shared with his family. He loved to
fish, hunt, and camp. In 1981, Barry and Treva began ranching in Red Lodge, Montana. Barry
enjoyed the mountain views and tending to the animals, especially his horses.
Barry was an exceptional chef and storyteller. Often, he would host gatherings with his family
and friends. His signature drink, which he coined a “Swamp Water,” was sure to be served.
Barry was a strong willed, selfless man who is loved and missed by his wife, Treva; children,
Mary Ann Justin, Suzan James, Kevin (Lynda) James, Jeremy (Amy Jo) James; grandchildren,
Tony Justin, Sam Justin, Bobbe` Stark, Britney (Kyle Caires) James, Nicholas (Cyndy) James,
Jase James, Sienna James; great-grandchildren, Charlotte Anderson, Jesse James, and soon-to-
be, McKenzie Caires; siblings, Beverly (Pi) Miller, Kathi (Steve) Wallace, Cyndey Engle; other
relatives and friends.
Barry is preceded in death by his granddaughter, Emily Justin; mother, Sue (Ed) Fennick and
father, Jesse (Betty) James.
Arrangements with Ballard-Sunder Funeral Home, Prior Lake.
-------------------------------------------
From: William Day    Sent: Friday, November 23, 2018 7:16 PM
Subject: NWA Captain Barry James has flown west