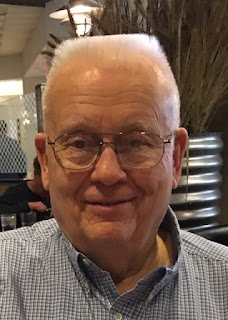 Notification with the passing of RNPA member retired Northwest captain and CDR USNR Leif Allen Elstad, age 78.  CDR Elstad joined Northwest Airlines 05-09-1966.  He is survived by his wife Audrey plus their children and many other family members.
To view the obituary online please visit the funeral home website at
https://www.bouldercityfamilymortuary.com/notices/Leif-Elstad
As noted below, services for CDR Elstad are planned for January 4, 2019 at Southern Nevada Veterans Memorial Cemetery in Boulder City NV, with light luncheon to follow at the Boulder City Elks Lodge.  If more information is received we will be sure to pass it along.
Thank you,
~ Carol for the PCN
Obituary..................CDR LEIF ELSTAD U.S. Navy Reserve, Retired CDR


Leif A. Elstad USNR (Ret) age 78, passed away Saturday, October 27, 2018, in Henderson. He was born December 12, 1939, in Story City, Iowa, to Laura and Martin Elstad. Leif joined the U.S. Navy and served his country for 22 years. During his service, he was awarded numerous Medals of Honor and Valor for his heroic efforts and achievements. Leif married Audrey Gagner October 21, 1961, in Pensacola, Fla.. They moved to Boulder City, from Apple Valley, Minn., in July of 1983 as he was transitioning towards retirement. Leif retired from Northwest Airlines as a Senior 747 Captain. Leif was a member of the Lutheran church. He was a member of the Boulder City Elks Lodge, American Legion, Veterans of Foreign Wars and many other military/civilian organizations. Leif and Audrey enjoyed traveling in their motor home and Leif served as national director of Family Motor Coach Association. He also enjoyed playing golf and being with family and friends. He will always be remembered as a master storyteller. Leif is survived by his wife, Audrey Elstad; daughter, Dawn (Terry) Murphy; son, Jon Elstad; and brother, Erik (Glenda Marie) Elstad. Services will be at 11:15 a.m. Friday, January 4, 2019, at Southern Nevada Veterans Memorial Cemetery, 1900 Veterans Memorial Drive, Boulder City, Nevada 89005, all are welcome. In lieu of flowers, donations may be made to the veteran's charity of your choice. Family and friends can sign an online memorial guestbook at www.bouldercityfamilymortuary.com
Posted by death at 12:34 PM