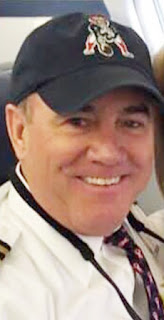 Notification with the passing of Northwest/Delta Air Lines F/O Randall ‘Randy’ William Adams, age 62.  F/O Adams’ seniority date is listed as 02-16-1996, based DTW.  As noted in his obituary below, a Mass of Christian burial will be held January 26th at St. Maximillian Kolbe Catholic Church, Pembroke Pines, Florida followed by burial with Full Military Honors at Hollywood Memorial Gardens Cemetery.
To view Randy’s obituary online, please visit
https://www.theridgefieldpress.com/127197-obituary-randall-w-adams-62/
Thank you,
~ Carol for the PCN
Obituary............F/O Randy Adams
After a hard fought battle with an aggressive cancer, Randall William Adams, 62, of Boca Raton, Florida passed away on Sunday, December 16, 2018 peacefully with his daughters Kaitlyn Marie, Sarah Victoria, Emily Fay and loved ones by his side.
Randy was a devoted father who had a great impact on his family and the world around him. He was born in Miami, Florida to mother Julia Moore Snyder and father William R. Adams, who both predeceased him. Randy grew up mainly in Ridgefield Connecticut in a large extended family with 4 sisters and 4 brothers.
Randy attended Ridgefield High School & graduated from Central Connecticut State University. Upon graduating he was
commissioned as a 2nd Lieutenant in the United States Army where he served proudly for 8 years until his Honorable Discharge. He then moved to Florida where he raised his family in Pembroke Pines, Florida. He continued to serve his country in the United States Coast Guard as an aviator, flying the HH65 Dolphin helicopter and retired as Lt. Commander. It was in the service where he followed his lifelong dream of flying. This love of flying led to a career as a commercial airline pilot where he proudly flew for ComAir , Northwest and lastly Delta Airlines as First Officer.
Randy loved all his family and was a true patriot to his country. He proudly flew the American Flag outside his home and on practically everything he owned. Randy was a devout Boston Red Sox and New England Patriots fan, even naming his dog "Brady" after the Patriots quarterback! He was an avid boater, skier and was a great cook (his ribs and chicken wings were outstanding!). Randy had a fun-loving personality and touched so many throughout his life -with lifelong friends from every part of his life.
After learning that his cancer returned in March 2018 Randy was optimistic he would beat it. Randy remained brave, even throughout his final days.
Randy is survived by his three daughters as well as sisters Sally, Heidi, Beth & Suzy and brothers Scott, Billy, Mike and predeceased John as well as sisters-in-law Jen & Shannon, brothers-in-law John, Bob & Neil & numerous nieces & nephews
A Mass of Christian burial will be held on Saturday, January 26, 2019 at St. Maximillian Kolbe Catholic Church, 701 North Hiatus Road, Pembroke Pines, FL 33026 and Relatives and friends are kindly invited to attend Burial with Full Military Honors will follow at Hollywood Memorial Gardens Cemetery in Hollywood.
In lieu of flowers the family requests donations to charities close to Randys heart:
The Jimmy Fund, 10 Brookline Place West, 6th Floor, Brookline, MA 02445 or online at   www.jimmyfund.org
The Wounded Warriors Project, P.O. Box 758517, Topeka, Kansas 66675 or online at https://support.woundedwarriorproject.org.