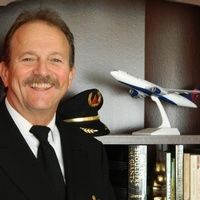 Notification with the passing of retired Northwest pilot Captain George Martin Payne, age 66.  Captain Payne joined Northwest Airlines 08-15-1986.  He is survived by his wife Beatrice Diehl, his sons and many other extended family members.
To view the obituary online and offer condolences, please visit the funeral home website at
http://www.hamptonfuneralhomes.com/obituary/george-payne  or at
http://obituaries.ottumwacourier.com/obituary/george-payne-1072219165
Captain Payne’s obituary notes that a gathering and celebration of life event will be held at a later date.
Thank you,
~ Carol for the PCN
Obituary......................George Payne
George Martin Payne, formerly of Ottumwa, Iowa, passed away at his home in Jonesville, MI on January 11, 2019.
George was born February 21, 1952, in Great Lakes, Illinois, to Philip P. and Beulah J. Myers Payne.
He graduated from Ottumwa High School in 1970 and earned a Bachelor of Science in Mathematics from Iowa State University in 1974. He commissioned as an officer in the United States Navy and served from 1974 to 1986. He subsequently began his commercial aviation career as a pilot with Northwest Airlines. After he retired as a 767 Captain, he served as an Aviation Safety Inspector for the Federal Aviation Administration.
George loved the outdoors, both soaring above as a pilot and firmly on the ground as a passionate arborist, woodworker, and BSA volunteer. He especially enjoyed his involvement with Troop 174 of Hillsdale, MI. George was an ardent lifelong learner, but treasured time with family above all.
George leaves behind his wife, Beatrice M. Diehl, and his sons, Alexander P. Payne (Albuquerque, NM) and Nicholas F. Payne (Pensacola, FL). He is also survived by siblings Sam (Mary) Payne, Bill (Carol) Payne, Frank (Cheri) Payne, Connie (Dan) Cavanaugh, Mary Ann (Rick) Southworth; step-mother Franrica Payne, step-brothers Martin Simonson and Danny (Melissa) Simonson; and many nieces and nephews.
He was preceded in death by his parents, Phil and Beulah, and sisters, Rose and Marcia Payne.
His body has been cremated and a family gathering and celebration of his life is being planned for a later date.


In lieu of flowers please consider honoring George's memory by planting a tree, spending time with your family and/or volunteering your time to the youth of our country. Please visit www.hamptonfuneralhomes  to sign the guestbook and/or send a condolence to the family.
Posted by death at 5:46 PM