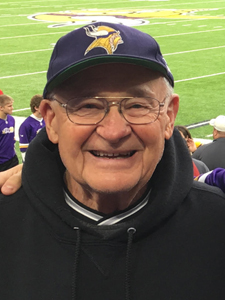 Notification with the passing of RNPA member retired Northwest pilot Captain Wayne Mathew Segulia, age 88.  Captain Segulia joined Northwest Airlines 05-16-1959.  He is survived by his wife Carol, their children plus grand- and great grandchildren.
To view the obituary online and share memories, please visit
https://www.ballardsunderfuneral.com/wayne-segulia/
Mass of Christian Burial for Captain Segulia was held yesterday in Prior Lake, Minnesota.
Interment will be at Fort Snelling National Cemetery,  Minneapolis, Minnesota.
For those wishing to, personal condolences may be sent to the family at
17750 Fairlawn Ave., Prior Lake MN 55372-2804.
Thank you,
~ Carol for the PCN
Obituary..............
Wayne Segulia, of Prior Lake, passed away on January 27, 2019, at the age of 88.
Mass of Christian Burial is Thursday, January 31 at 11 a.m. with visitation beginning at 9:30 a.m. at St. Michael Catholic Church in Prior Lake. Father Tom Walker will preside, and his children will act as pallbearers. Wayne will be laid to rest at Fort Snelling National Cemetery in Minneapolis with full military honors provided by the Fort Snelling Rifle Squad.
On July 23, 1930, parents Mathew and Frances Segulia celebrated the birth of their only child, Wayne Mathew Segulia.Wayne grew up in Butte, MT, an old fashioned, rough and tumble mining community. Living in Butte during the Great Depression instilled a strong work ethic in Wayne.
From an early age, Wayne worked underground in the copper mines nights and weekends to help support his family. Following his high school graduation, Wayne attended the Montana School of Mines. Before completing his degree, Wayne enlisted in the United States Air Force. He was stationed in Japan, Korea and numerous places in the United States. Wayne was a fighter pilot and was part of a top-secret group of nuclear bomber pilots. Wayne was always so proud of his military service and grateful that he never had to deploy a nuclear bomb.
After his honorable discharge, Wayne returned to Montana. He began working for commercial airlines, and eventually ended up at Northwest Airlines. He provided a wonderful life for his family. His work brought him to Prior Lake, where he raised his four children. After 31 years, Wayne retired from Northwest as Captain on the DC10.
In the mid 80's, Wayne met the love of his life. Wayne and Carol were married on September 21, 1985 and blended their two families together. Although most of the kids were out of the house by that point, Wayne and Carol always made sure they had a loving home where all their children, grandkids and family dogs were welcome.
Wayne was always active in his free time. Golf was one of his favorite activities. Wayne even golfed 18 holes in October before his health began to decline. An avid outdoorsman, he enjoyed fishing, hunting, spending time at the cabin up north, and hiked Pikes Peak at age 65. For years, Wayne was dedicated to addressing the "squirrel problem" at his house. He would catch and release them far away from his own yard. Despite the relocation, they always found their way back!
As a faithful man, Wayne served as an usher at St. Michael Catholic Church on the Saturday night crew. He also volunteered at the CAP Agency with the food shelf. Wayne had a kind heart and was always happy to help others. Family was the most important thing in Wayne's life. He was a wonderful father & grandpa. Wayne was also a dedicated husband and loving caretaker for Carol.
Wayne is loved and missed by his wife, Carol Segulia; children; Mark Segulia, Mike (Cindy) Segulia, Matt Segulia, Margy Segulia, Jeff (Lori) Doerr, Brad (May) Doerr, Crystal (Paul) Dvorak; grandchildren, Jessica, Nathan, Kirsten, Carly, Dan, Steve, Jason, Hunter, Madison & his six great-grandchildren; other loving relatives and friends.
Wayne was greeted in Heaven by his parents.
Ballard-Sunder Funeral & Cremation proudly serves the Segulia family.


www.BallardSunderFuneral.com
Posted by death at 5:40 PM