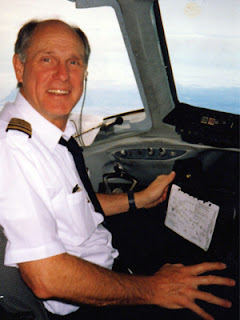 Notification with the passing of retired Northwest pilot Capt. Welsey ‘Lee’ Edmund Schlough Jr., age 75.  Captain Schlough joined Northwest Airlines 04-08-1968 and retired with Northwest in 2003.  He is survived by his wife Joanne and his son Bryann plus many other dear family members.
To view the obituary and guestbook online please visit the funeral home website at
https://www.ballardsunderfuneral.com/w-lee-schlough/
Please see obituary below for March 18-19th service arrangements in Minnesota.
If more information is received, we will be sure to pass it along.
Thank you,
~ Carol for the PCN
Obituary................... Lee Schlough
Lee Schlough, age 75, of Prior Lake MN, entered eternal peace on Saturday, March 9, 2019 at the NC Little Hospice in Edina after a valiant battle with prostate cancer.
A time of gathering will be on Monday, March 18, from 4 to 7 p.m., at Ballard-Sunder Funeral and Cremation 4565 Pleasant Street SE, Prior Lake and one hour prior to the Mass of Christian Burial on Tuesday, March 19 at 11 a.m., at St. Michael Catholic Church 16400 Duluth Avenue SE, Prior Lake. Father Tom Walker will preside. Urn bearers will be members of Lees family, Jim, Dick, Don, Paul and Tom. He will be laid to rest at St. Michael Catholic Cemetery, with military honors provided by the Prior Lake VFW Honor Guard.
Welsey Edmund Schlough Jr. was born to parents, Wesley and Harriet (Greenwood), on May 31, 1943, in Chicago, IL. Most of his childhood was spent growing up in St. Cloud, MN, with his twelve younger siblings. Lee attended Cathedral High School and was a proud graduate of the class of 1961. He briefly attended the University of Minnesota before enlisting in the United States Navy. For the next six years, Lee was a pilot during the Vietnam War. Through networking, he took his experience and expertise and became a pilot for Northwest Airlines. For nearly 40 years, Lee traveled the world as a pilot. At the age of 60, he retired his wings.
Through mutual friends, Lee was introduced to a beautiful young gal named, Joanne Eissing. She was immediately drawn to his good looks and kindness. They dated for a few years before marrying on October 5, 1968, at the Basilica of St. Marys in Minneapolis. They established a home in Lakeville, where they were blessed with a wonderful son named Bryann. In 1976, the family moved to Prior Lake, where they have called this community home. As a family, they enjoyed traveling. The best times for Lee was being home surrounded by his family. When time allowed, Lee loved to attend Indian Guide gatherings and Bryann's various sporting events.
Life became the richest when he became poppy to Novi and Olly. Lee and Joanne loved to spoil them any opportunity they had.
For over 40 years, Lee assisted his family preparing and serving customers at the Family Tree Café, during the Minnesota State Fair. It didn't matter your age or relationship, everyone in the family was involved! In the 1980's, Lee took an interest in running. He participated for 13 consecutive years in Grandmas Marathon, along with the neighborhood crew. This event became a special gathering each year for the neighbors as they cheered the runners on.
Lee and Joanne purchased a home at the Highland Woods Community in Bonita Springs, FL. For over 20 years, they created many lasting friendships. Lee helped initiate the Bocce League, enjoyed socializing and played golf. He took his love of golf into customizing and repairing clubs for anyone who asked. He also studied their swing to perfect their game and give the golfer the best fit. Lee was very generous with his time and others projects, it didn't matter the task. Committed, and a perfectionist, he was all about the process rather than the end result.
Dedicated to his faith, Lee was involved at St. Michaels Church. He was a great man displaying generosity, kindness and love to others.
Lee will be forever loved and missed by his wife of 50 years, Joanne; son, Bryann (Lisa Edgerly) Schlough; grandchildren, Novia Schlough, Olly Schlough; siblings, Jim Schlough, Dick (Rebecca) Schlough, Mary (David) Huber, Judy (John) Stadden, Don (Theresa) Schlough, Margaret Schlough, Barbara Fritz, Paul (Jamie) Schlough, Patty Schlough, Terri Braun, Joy (Brian) Lang; aunt, Carole Freeman; many other relatives and friends.
Lee is welcomed home by parents, Wes and Harriet; brother, Mark Schlough and sister-in-law, Sharon Schlough.


BallardSunderFuneral.com
Posted by death at 4:57 PM