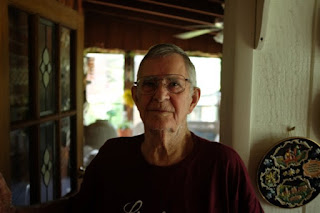 News has reached our group with the passing of Delta Air Lines retired meteorologist Mr. Richard Frank Patton, age 91.  Mr. Patton is survived by his wife Billie, their children plus grand- and great grandchildren.
To view/sign the online guestbook please visit
https://www.dignitymemorial.com/obituaries/college-park-ga/richard-patton-8236517
Visitation and services will be held April 13th at Forest Lawn Memorial Gardens, 5755 Mallory Road, College Park, Georgia.
Please see information below.
Thank you,
~ Carol for the PCN
Obituary...............Richard Frank Patton of East Point, Georgia passed away peacefully on April 1, 2019. He was currently residing at Heartis of Fayetteville with his wife Billie at the time of his passing where he was surrounded by his family. Richard was the first born of 4 children to Lorene and Wescott Patton on July 7, 1927 in Chicago, Illinois. The family lived on a farm in Whitewater, Wisconsin until Richard was 14 and then moved to Beloit. He graduated from Beloit High School in 1945 and joined the Air Force at the age of 18. He served for 21 years as a meteorologist and retired in 1963 as a SMSGT. During his time in Tokyo, Japan he met and married Billie Eubanks, a corporal in the Army. After retiring from the Air Force, Richard started work for Delta Airlines in Atlanta where he continued his meteorology career for 25 years, retiring in 1991. Richard loved his church family at East Point Christian where he served as an elder for many years. He was a devoted family man and loved by everyone he came in contact with. He will be greatly missed by many. He is survived by his wife of 68 years Billie, a son Alan (Linda) Patton, a daughter Patti (David) Burke, 4 grandchildren Sean Patton, Stacey (Eric) Gibbs, Katie (Joshua) Odom and Jessica (Darryl) Atherton and 7 great-grandchildren. A brother Edward (Joan) Patton, 2 sisters Pat (John) Von Der Vellen and Judy (Frank) Young. Services will be held Saturday, April 13 at Forest Lawn Memorial Gardens, 5755 Mallory Rd, College Park, Ga. Visitation will begin at 1:00 pm and services will begin at 2:00. There will be a gathering for family and friends after the graveside service at the home of David and Patti Burke.
In lieu of flowers donation may be made to: St. Jude Children’s Research Hospital, Memphis, Tennessee The American Indian Christian Mission, Show Low, Arizona.
-----Original Message-----
From: Rocky   Sent: Wednesday, April 10, 2019  Subject: Richard Patton
So sorry to report that our retired meteorologist Richard Patton
died on April 1. Visitation and service Saturday.
https://www.dignitymemorial.com/obituaries/college-park-ga/richard-patton-8236517?fbclid=IwAR0WZpNi6hYE_rvA7gdrOMVqj93uAG7KaTxLuqZNzE9dBTzdaj96q4iJojU