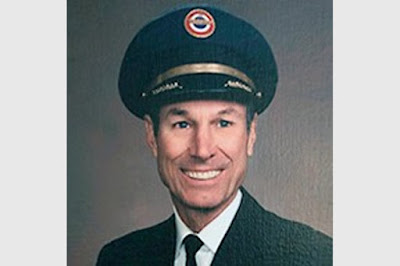 Notification with the passing of RNPA member retired Northwest pilot Captain Jerry Logan Pope, age 88.  Captain Pope joined Northwest Airlines 05-08-1959.  He is survived by his wife Gloria.
To view the obituary online and to view the family photo gallery, please visit
http://www.startribune.com/obituaries/detail/0000303211/?fullname=jerry-logan-pope
Arrangements are not known....should more news be received we will be sure to pass it along.
Thank you,
~ Carol for the PCN
Obituary.......................
Jerry Logan Pope, Bloomington, MN, passed away on March 23, 2019 at the age of 88. Born in Atlanta, Georgia, Jerry was named after his mother, Geraldine Logan. His father, James Soule Pope, was editor of the Louisville Courier-Journal and the Atlanta Constitution newspapers. Like his father, Jerry had a talent for writing.  For many years he wrote freelance articles and book reviews. He also read avidly, with favorite writers ranging from John D. MacDonald to Kate Atkinson and, later in life, the poet Emily Dickinson.
As a child, Jerry loved creating home monster movies with his beloved brothers, Jimmy and Logan. The family moved from Atlanta to Louisville, Kentucky, when Jerry was in high school, and he graduated from Louisville’s Male High (an all-boys school) in 1947. As a teen, he became a boxer, coached by his older brother.  Other interests of early adulthood included deep sea fishing and skiing.
Jerry graduated from the University of Florida in 1951 with a varsity letter in tennis. After college, Jerry enlisted in the Air Force, but instead was drafted into the Army and ended up serving in the Marines for two years. He later joined the Navy as a pilot, serving for three years and rising to the rank of Lieutenant. He was then hired by the Army as a civilian flight instructor, thus giving him an association with four branches of the military. Several years later, he went back into the Navy for three more years, based at the Roosevelt Roads Navy base in Puerto Rico. During the Cuban missile crisis, he flew between Rosie Roads and Guantanamo Bay to transport photographs of the silo installations.
Jerry’s adult life was defined by flying airplanes, playing tennis, and making music. He joined Northwest Airlines as a pilot in 1959. There he later met his wife, Gloria, an NWA flight attendant. Jerry flew aircraft including the DC-6, DC-7, Lockheed Electra, and B-727 during his 31-year career at NWA, retiring in 1990 as a DC-10 captain. He remained interested in flying, and the last movie he saw in the theater was Sully.
The life of a pilot allowed Jerry ample time to perfect his tennis game, and upon his retirement from the airline, he dedicated himself to the pursuit of a top-ten national ranking for his age bracket, travelling the country to participate in tennis tournaments. He welcomed moving into a new age bracket every 5 years, and held the #1 sectional ranking in singles for his age division 34 times. In 2006, he achieved his goal with a national ranking of #8 in singles in the 75 age bracket, and #2 in doubles.
Jerry also served as a linesman and umpire at the U.S. Open tournament in Forest Hills, New York, and he mentored many junior tennis players, including serving for 17 years as volunteer assistant coach at Jefferson High School (where Jerry’s stepson Matt played on the team). In 1999, Jerry was named to the U.S.T.A. Northern Hall of Fame for his many tennis accomplishments. His picture hangs on the hall of fame wall at the Fred Wells Tennis & Education Center.
Jerry’s competitive tennis career ended in 2007, when he suffered a stroke. He trained to regain his agility and strength, but when it became apparent that he would not be able to play tennis at his former level, he took up golf instead, and enjoyed watching tennis and golf tournaments on television. He also loved to walk along the banks of Nine Mile Creek. For many years, he and Gloria took a break from the Minnesota winters on the Florida gulf coast, watching sunsets and Roseate Spoonbills from their balcony.


Jerry took up music later in life, learning to play the guitar and the harmonica. Music was a joy shared with Gloria, and many evenings were spent with friends and family experimenting with their collection of oddball instruments. Jerry also composed his own songs, especially for family occasions, and created a songbook titled “Dreaming in Panther Country” (a reference to his love for wildcats).
Posted by death at 9:09 PM