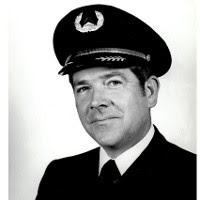 John G. Caldwell
( February 15, 1936 - August 12, 2019 )
John Gillespie Caldwell, 83, of Windham, New Hampshire, passed away suddenly of heart disease on August 11th aboard his boat, Nine Knots, at New Castle, New Hampshire.
Born in Patterson Creek, West Virginia, on February 15, 1936, he was the son of George Gillespie Caldwell and Helen Kesecker Caldwell. His brother George Matthew Caldwell predeceased him in 2000.
John was a pilot with Delta Airlines for 38 years, retiring in 1996 as Delta's Number 4 International Pilot flying the Boeing 777. He had flown all over the world for many years during his time with Delta and had previously worked for Allegheny and Northeast Airlines. He began his commercial flying career at age 19, at the time one of the youngest co-pilots to fly commercial airplanes.
John leaves his loving wife, Betty Wong Caldwell; her daughters Lily Hamel and husband Erik of Danvers, MA, Laurie LaChapelle and husband Matthew of Andover, MA, and Leslie Ross of North Berwick, ME; and her son Nathan Leung and wife Michelle of North Reading, MA as well as 3 granddaughters and 6 grandsons.
Also surviving him is his first wife, Janet Marshall of Peabody, MA; his daughters Bonnie Caldwell and wife Nancy Natale of Easthampton, MA, and Judy Caldwell of Peabody, MA; and his son David Caldwell and wife Heather Knowles of Salem, MA.

A private ceremony to celebrate John’s life will be held with family and friends at a future date. It was his wish that his remains would be spread near the Isles of Shoals – one of his favorite places on earth.
Captain Caldwell joined Northeast on June 9, 1958 and retired from Delta on March 01, 1996