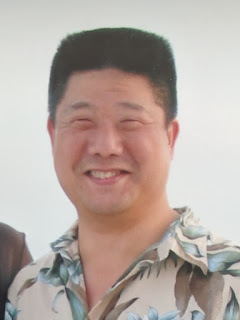 Notification with the passing of Northwest/Delta pilot F/O John Hong, age 58.  John joined Northwest Airlines 10-14-1988.  He is survived by his wife Mary and their 12 year old twins Rain and Kai.
Obituary information and guestbook is available online at the funeral home website:
https://www.daviswatkins.com/notices/John-Hong
Also at
https://obits.nwfdailynews.com/obituaries/nwfdailynews/obituary.aspx?n=john-hong&pid=193924154&fhid=41661
The obituary notes that arrangements have been entrusted to Davis-Watkins Funeral Home of Miramar Beach, Florida.  Services for John will be September 19th at Saint Rita's Catholic Church, 137 Moll Dr, Santa Rosa Beach, FL, followed by a catered reception.  Please see more details below.
Thank you,
~ Carol for the PCN

Obituary……………John Hong, 58, of Destin, FL, passed away at home on Monday, September 16, 2019, surrounded by his family after a long journey with cancer. John was born in Dobb's Ferry, NY, on December 20, 1960 and grew up in New Jersey and Orlando, FL. John was preceded in death in 2004 by his father Theodore Chin Hong and in 2012 by his mother Seouhee ""Sue"" (Kim) Hong. John is survived by his wife and partner of 27 years Mary (Schmiedicke) Hong and by their twin children Rain Hong and Kai Hong, age 12. He is also survived by his brother Robert of Tokyo, Japan, and many aunts, uncles and cousins in the United States and Korea. John served as a Captain in the United States Air Force and flew the KC-135 Sratotanker between 1981 and 1988 and was recognized by the 22nd Air Refueling Squadron for outstanding service. After his time in the service, John became a First Officer with Northwest Airlines and then Delta Airlines, flying internationally and serving two terms as a representative in the Air Line Pilots Association (ALPA). John enjoyed traveling the world and most especially the camaraderie of his fellow pilots and crews. The highlight of John's career was being based in Honolulu for 14 years flying wide-body trips to Asia and beyond. He and Mary formed lifelong friendships and memories during their time there.
John's greatest sources of pride were his children Kai and Rain who brought him endless entertainment and joy. He bore his responsibility as a father nobly and gave great attention to their care, education, artistic pursuits, hobbies, and happiness. When they were babies, John would jokingly refer to his children as ""food-to-noise converters"" but was amazed as they developed into talented pianists and artists, chess whizzes, card sharks, sailors, and funny, bright-hearted, gifted souls. He loved them as true angels in his life and the one thing on planet earth he wasn't quite ready to leave. The painful stages of John's journey were brightened not only by his children and amazing friends who became his caregivers at home but also by the humor and dedication of his colleagues and friends, the real and virtual co-pilots from his professional and personal life who became the quickest and surest sources of laughter for him on the darkest days.
John was an avid collector of electronic gadgets and was proud that his bargain-hunting frugality provided gifts for his generous spirit to share with many grateful recipients. He truly enjoyed taking care of friends and family in every way with dinners out, lively conversation, genuine interest in our goings-on, with his wit and wisdom throughout. John's family extends their heartfelt thanks for the compassionate and professional care he received from Dr. Mose Hayes and his staff at Sacred Heart Oncology; Dr. Kasi at the Mayo Clinic-Jacksonville; Alyssa, Tracey and staff at Emerald Coast Hospice; and Katherine and staff at Destin Health Care and Rehabilitation. The care and humanity you showed John and his family were exceptional and a blessing to us.
We will remember John for his strong sense of justice, his folly in pointing out the idiosyncrasies (idiocies) in the world around him, his love and pursuit of good sushi, good massages, and anything related to his second-home Hawaii, especially his expansive Hawaiian shirt collection. John brought us all humor with his dry sarcasm, comfort of the pure generous heart sort, gadget advice, a few conspiracy theories, and, when he beat you in a verbal spar, the purest smile of simple joy at winning the argument. Dearest John, we miss you already. Aloha. Mahalo. A hui hou.
Arrangements are being coordinated with Davis-Watkins Funeral Home in Miramar Beach. Services for John Hong will be Thursday, September 19 at 11 am at Saint Rita's Catholic Church, 137 Moll Dr, Santa Rosa Beach, FL, followed by a catered reception and celebration of life that same day from 4:30 to 6:30 pm at Pavilion F at Henderson State Park in nearby Destin, FL. Hawaiian shirts and flip-flops welcome. A burial service will be held in Hawaii in November.
An education fund has been established for John's children at https://www.gofundme.com/f/hong-children-scholarship-fund?utm_source=customer&utm_medium=copy_link&utm_campaign=p_cp+share-sheet
Please visit www.daviswatkins.com  to sign the guestbook, express condolences and share memories.