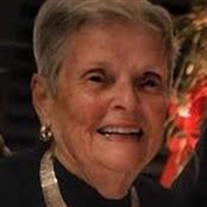 Word has reached our group with the passing of Shirley Wiginton, wife of Delta Golden Wings member retired Delta Air Lines pilot Captain Louis B. Wiginton.  Shirley is survived by her husband, their children and grandchildren, plus many other friends and family members.  Services were held in Hammond LA.
To view/sign the online guestbook please visit
https://www.thompsoncares.com/obituaries/Shirley-Wiginton/#!/PhotosVideos
Personal condolences may be sent to Capt. Wiginton and his family at
51317 WIG LANE
LORANGER LA 70446-1935.
Thank you,
~ Carol for the PCN

Obituary……… Shirley G. Wiginton
Shirley Kay Graham Wiginton was called to her Heavenly home on August 25, 2019 at the age of 84, surrounded by her loving family and sweet puppy, Bear. Shirley was born on May 21, 1935 in Alma, Michigan to the late Ford and Maxine Graham. She was preceded in death by her son, Louis B. “Tige” Wiginton, Jr. and her son-in-law, William Taylor “Bill” Head. Shirley is survived by her loving husband of 67 years, Louis B. Wiginton, her brother, John Graham (Suzanne), and her four children; Donna Ann Wiginton Howes (Fritz), Dr. Debbie Wiginton-Hintze (Paul), Diane Maxine Katherine Wiginton, and John Richard Wiginton (Amy). She was the proud and loving grandmother of eight grandchildren, 13 great-grandchildren, and one great-great-grandchild.

Shirley spent her early childhood in Lake Charles, New Orleans, and Mobile, Alabama before moving to Hammond with her family at the age of 9. She moved to Loranger in 1977.

She will be greatly missed by her family, friends, and community. Visitation will be held at Brandon G Thompson Funeral Home, 12012 Highway 190 West at 10:00 am on Saturday, August 31, 2019 with the Memorial Service immediately following at 11:00 am.

In lieu of flowers, memorials can be made to Nesom Memorial United Methodist Church, P.O. Box 76, Tickfaw, LA 70466.