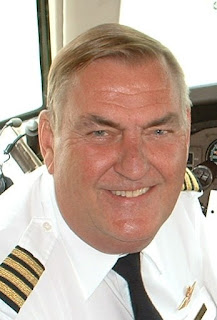 Notification with the passing of retired Western/Delta pilot Captain Craig Allen Rhymers, age 70.  Captain Rhymers joined Western Airlines 11-27-1978 and retired with Delta Air Lines in 2013.  He is survived by his wife Joan plus many other dear family members and aviation colleagues.
To view/sign the online guestbook please visit https://www.brenny.com/notices/Craig-Rhymers?fbclid=IwAR1GvEAfOSuBdGCJrxkAsYNpgAuRMd5s3YmpLphfkLWPXkJ9VAAGyPx98y0
Funeral services for Captain Rhymers were held in Staples, Minnesota with graveside services at Ft. Snelling National Cemetery in Minneapolis.
For those wishing to send a personal note, whitepages lists the family residence as
34825 Sleepy Valley Rd.,  Crosslake MN 56442-3005
Thank you,
~ Carol for the PCN

Obituary………..Craig Allen Rhymers, 70, Crosslake, died Sunday, 9-1-2019 at CRMC Hospital, Crosby, with his family at his side.  Craig’s funeral service will be held at 3 PM, Thursday, 9-5-2019 at Staples United Methodist Church, Staples, with visitation for one hour prior to the service.  The graveside service with honors will be held at 11:45 AM, Friday, 9-6-2019 at Assembly Area # 5, Ft. Snelling National Cemetery, Minneapolis.

Craig was born on October 3, 1948 in Minneapolis, MN, son of Roy and Irene (Wassing) Rhymers.  He grew up and was educated in south Minneapolis, graduating from Roosevelt High School.  While in school, he loaded bags at MSP Airport.  He attended the U of M, Minneapolis, graduating with a Bachelor’s Degree.  He served in the US Air Force as a T38 Instructor at Laughlin AFB, Del Rio, TX and served in Desert Shield/Storm flying C-130’s for the 133rd Tactical Airlift Wing.  He headed up the runway lighting project at Camp Ripley.

Craig worked with United Airlines in Denver, working with the flight simulator.  He began flying with Western Airlines out of LA, which later merged with Delta.  He flew with Delta until retiring on October 2, 2013 as 5th Captain from the top.  He was also retired from the Air National Guard as a Lt. Col.  In his younger years, Craig enjoyed boating, fishing, waterskiing and flying, flying, flying!!!  He enjoyed Gopher Football, Twins Baseball and Vikings Football.  His family also remembers him as “The Man of the Grill”!

He was united in marriage with Joan Batcher on 8-16-2015 at the Staples United Methodist Church.

He is survived by his wife: Joan (Joannie) of Crosslake; his daughter: Amanda Rhymers of Louisville, KY; step-children: Danika (Zach) Ohly of Rochester, MN, Zachary Batcher Johnson of Shakopee, MN, Joetta (Danny) Markow of Boise, ID, Turner Batcher Johnson of Minneapolis, MN, and Gunner Batcher Johnson of Helena, MT; granddaughter: Charlotte Ohly of Rochester, MN; brother: Dr. Kurt (Elaine) Rhymers of Alexandria, VA.  He was preceded in death by his parents: Roy and Irene; his wife: Debra on July 8, 2009.  Arrangements have been entrusted to the Brenny Family Funeral Chapel of Staples.  www.brenny.com  https://www.brenny.com/listings