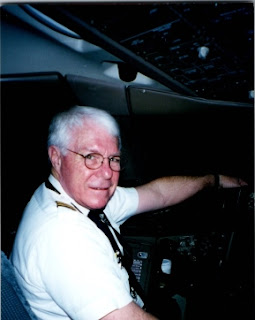 Friends have shared with us the passing of Delta Golden Wings member retired Delta pilot Captain Robert Foster Lindley Jr., age 76.  Captain Lindley joined Delta Air Lines 07-17-1970 (son Rob is also a DL pilot).  Please see below for links to obituary information and service arrangements.  You can read more of Capt. Lindley’s military/aviation career with pictures in this Warbird Digest article dated Dec. 2017 :
http://warbirdsnews.com/warbird-articles/a-veterans-story/you-can-go-home-again-sort-of.html
Notes of condolence may be sent to the Lindley family at
915 Lufbery Circle,   Williamson  GA 30292-3422
Thank you,
~ Carol for the PCN

From: Harry Ballance [mailto: hgballance@yahoo.com ]
………………….. retired B-777 Captain Robert (Bob) Lindley has passed away, after a long struggle with metastatic lung cancer.  He is survived by his wife of fifty-two years, Anne, daughter Sara, son Rob - also a Navy pilot and Delta Captain - and numerous grandchildren. Bob was a native of Oklahoma, a Navy fighter pilot, and a pilot for Delta for over thirty years.  He was also active in the restoration of vintage airplanes and classic wooden boats. He was an active member and member of the Session of the Covenant Presbyterian Church in Fayetteville.
A memorial service will be held at the Covenant Presbyterian Church of Fayetteville this coming Saturday at 11:00 am. The Church is located at 819 Highway 314.
~~~~~~~~~~~~~~~~~~
Obituary link:  https://www.conner-westburyfuneralhome.com/tributes/Robert-LindleyJr

Bob had an affinity for aviation and soloed in a Piper Cub at age 16 while still in high school. Following his graduation from Northeastern State University in 1965, Bob attended Naval Aviation Officer Candidate school earning his coveted Navy “Wings of Gold” in 1967. He subsequently served two tours of duty in Vietnam where he flew over 300 combat missions in aircraft carrier based light attack aircraft. Following his Naval service, Bob began his career as a pilot for Delta Airlines in Miami, Florida. In 1991 Bob and Anne moved to Williamson, Georgia and after 32 years with Delta retired in 2003 as an Atlanta based 777 Captain.

Bob had a love of flying from an early age. It became both his hobby and his career. He restored and flew vintage planes and lived in an airport community so that he would always be near planes and flying enthusiasts. After his retirement from Delta, Bob pursued his love of boating. In addition to restoring antique Chris Craft wooden boats, Bob and Anne spent a year cruising the “Great Loop”. Through that adventure and many others, Bob and Anne met wonderful friends with whom they have remained close throughout their lives.

Bob served as an Elder of Covenant Presbyterian Church in Fayetteville, Georgia. Second only to his love of God came his love for family. His son Rob, like his father, became a Naval Aviator and a pilot for Delta Airlines. He and his wife, Amy, have three daughters, Katie, Elizabeth, and Caroline. Daughter Sarah has three sons, Martín, Patrick, and Christian. “Grandbob” delighted in sharing experiences with his grandchildren, whether through fun and games at the Lindley house, travel adventures, or attending their various games or performances.

In 2018, Bob was recognized with The Wright Brothers’ Master Pilot Award that is considered the most prestigious award the FAA issues to pilots. It recognizes senior aviators who have completed 50 years of safe flying.

Conner-Westbury Funeral Home 1891 W. McIntosh Road, Griffin is in charge of arrangements.
Please join the family and friends in honoring the life of Robert Lindley by visiting www.conner-westburyfuneralhome.com
to post your tributes and memories.