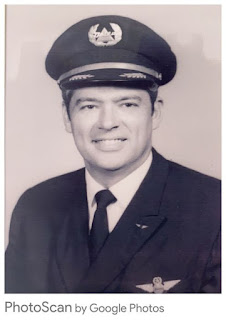 News has reached us with the passing of Delta Golden Wings member retired Delta pilot Captain Frank Albert Morse Jr., age 82.  Captain Morse first joined Delta Air Lines 09-04-1962 and retired with Delta in 1997, based Atlanta.  He is survived by his wife Frances ‘Fran’ , also their children and grandchildren.
To view/sign the online guestbook please visit
https://www.goundreydewhirstfuneral.com/notices/Frank-MorseJr
Obituary may also be viewed online at
https://www.legacy.com/obituaries/name/frank-morse-obituary?pid=194738738
Visitation and services will be held December 19 at Goundrey & Dewhirst Funeral Home, 42 Main St., Salem, NH.
For those wishing to send a personal note to the family, that address is
PO Box 1018,  Windham  NH  03087-1018.
Thank you,
~ Carol for the PCN

Obituary………..Frank A. Morse, Jr., of Windham, New Hampshire and of New Castle, Kentucky passed away on December 15, 2019 at the age of 82 after a long illness.  Frances “Fran” Morse, his wife of 52 years, and family members remained at his bedside for the last several days. Despite a variety of medical issues over the past several years, Frank maintained his trademark optimism and sense of humor until the end.

Frank first came to Windham with his parents, Frank and Peggy Morse, and sister, Jane, in 1944. He was an all-state athlete (football and baseball) at Woodbury High School. His family lived on Cobbett’s Pond throughout the 1950s where proudly he helmed one of the fastest boats on the pond. After a stint at the University of New Hampshire, he found his true calling as an airplane pilot. First, he flew F-86 fighter jets for the US Air Force, and later, he was a captain and senior pilot for Delta Air Lines. He loved everything about flying and often remarked that he never worked a day in his life because flying was too much fun to be called work.

Frank and Fran, along with their children, returned to Windham on Cobbett’s Pond in the 1980’s. An avid boater, he was frequently seen piloting several craft at somewhat slower speeds than in the 1950’s.

After retirement from Delta Air Lines in 1997, Frank split his time between Windham and his farm in New Castle, KY.  Frank and Fran purchased the farm in 1974 knowing virtually nothing about farming.  With his typical enthusiasm and great assistance from his in-laws, he developed into a knowledgeable and successful farmer.  Frank had enormous curiosity and was never afraid to try new things.  A self-taught and highly accomplished cook, he was particularly fond of baking bread. During his trips to France, he learned secrets of baking bread from French bakers. Armed with rudimentary French, he would show up at the back door of local bakeries at 4 AM while on layovers in Paris.

Calling hours will be held on Thursday, December 19, from 10 AM - 11 AM at the Goundrey & Dewhirst Funeral Home at 42 Main St., Salem, NH, followed by a service in the funeral home chapel at 11 AM. In lieu of flowers, please send donations to the Wounded Warrior Project.


..... Frank Morse was never with NE he was my Delta classmate Sep 4 1962 He came straight from the USAF