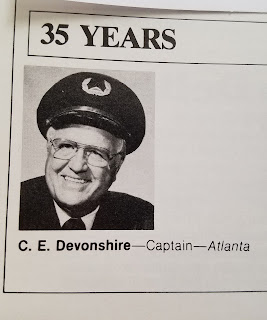 Word has reached our group with the passing of Delta Golden Wings member retired Delta pilot Capt. CHARLES EDWARD DEVONSHIRE, age 94.  Captain Devonshire joined Delta Air Lines 08-30-1950 and retired with Delta in 1985, based Atlanta.  He is survived by his wife Lois.
To view the death notice online please see
https://www.legacy.com/obituaries/name/charles-devonshire-obituary?pid=195500507  or
http://www.legacy.com/obituaries/neptune-society/obituary.aspx?n=Charles-Devonshire&lc=1905&pid=195500507&mid=9046666
For those wishing to send a personal note, whitepages lists the family’s most current residence as
8104 Arbor Ct.,  Fort Myers, FL 33908.
Should we receive further corrections or updates, we will be sure to pass them along to you.
Thank you,
~ Carol for the PCN 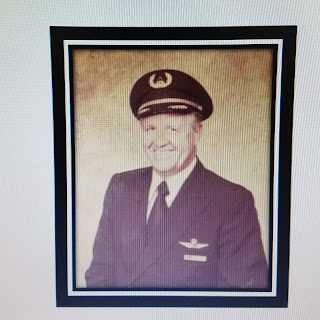 Captain Charles ”Chuck” Devonshire got his wings and departed on his final flight to be with Our Lord on Thursday, February 20, 2020 at 09:36 A.M.  in Fort Myers, Florida. He was 94 years old.

Chuck was originally from Pitman, New Jersey.  He was one of three children.  He joined the U.S. Naval Air Corp in 1943 while still a senior in High School during World War II.  He earned his wings and qualified on single and multi-engine aircraft and was assigned to the NATS VR6 squadron and spent 7 years on active duty flying the South Pacific and the Berlin Airlift. He spent 13 years in the Naval Reserve retiring in 1963 as a Lieutenant commander.

He started his career with Delta Air Lines in 1950 and retired after 35 years of service on August 30, 1985.  While with Delta he flew the following airframes DC3, DC6, DC7. DC8, DC9, CV880, DC8, DC10 and retired as an International Check Airman on the L1011.  He was lucky enough to have flown Delta’s Originating Flight from Honolulu and the Originating Flight to Paris, France. After Retirement he spent 6 years interviewing new hire pilots for Delta.

Chuck and Lois Fitch met on her maiden flight and sparks blossomed between the two of them.  Eventually, there relationship grew to a marriage proposal at 10,000 feet.  They spent 64 wonderful years together traveling and exploring the world.  They lived in Atlanta, GA, Coral Gables, FL and Fort Myers, FL.  He was an accomplished yachtsman cruising on the waters of South Florida and the Caribbean.  He enjoyed spending time with family and friends.  If the grandkids had a question, they would have to get the world globe out and he would explain the longitude and latitude of that place. He enjoyed teaching others about the world and navigation, loved his dogs, flying, water skiing, snow skiing, SCUBA diving, swimming, and being the center of attention with his stories and jokes.

Chuck and Lois moved to Fort Myers 34 years ago from Atlanta.  He is survived by his wife of 64 years, Lois Devonshire, son Charles Devonshire and family (daughter in-law Karen and three grandchildren Allie, Preston and Mitchell) in Jonesboro, GA and daughter Diana Villalobos and family (son in-law Guillermo) in Springfield, VA, and his brother Donald Devonshire.

He was loved by us all.  He will be missed!  Bless you pop for everything you have given and provided for us.