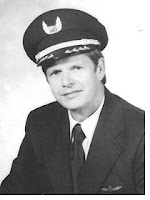 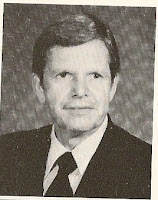 ========================
Captain George A. Holgreen
Beloved husband, Father, Grandfather and charitable servant of God passed away painlessly and peacefully, after enduring to the end suddenly on January 19, 2012. He was eighty four years young.
George was the oldest of four siblings whose mother Lavon Hall Holgreen was widowed when he was only ten years old. George filled the shoes of his departed father Ilet Holgreen with the grace and certitude of a devoted son.
His surviving sister Janice Holgreen Meads says of him "he has never done anything wrong" and because of his hard work and kindness he was endeard to his brother Gearald Holgreen, sisters Maurine Lavon Holgreen, Janice Holgreen Meads and his widowed mother Elizabeth.
George enjoyed professional success as an Captain for Western then Delta Airlines. George retired as the Senior Captain for Delta Airlines and was admired for his precision as a pilot and his calming presence as a commander in the cockpit, especially in times of uncertainty.
During and after his professional career George served his God with tireless service in the Temple. He was the "Oakland Temple Trainer" for many years. George grew up on the West Side of Salt Lake and attended West High School where his Uncle Best Friend and Mentor, Thomas Hall former City Commissioner and President of the Pioneer Stake of Zion both learned the meaning of life.
George is survived by his wife of 54 years, Suzanne Rice Holgreen, daughter, Sydney Rice Holgreen, sons, George Douglas Holgreen, Ronald James Holgreen, Gregory Ilet Holgreen, his sister Janice Holgreen Meads and many others who loved him because he loved God.
Funeral services will be held Tuesday, January 24, 2012 at 12:00 noon, at the Highland 15th LDS Ward Chapel, 5214 West Country Club Drive, Highland, Utah. Family and friends may call Monday evening from 6:30-8:00 pm at the Warenski Funeral Home, 1776 North 900 East, American Fork, Utah and also Tuesday morning from 10:30-11:45 am prior to services at the church. Interment will be in the Highland City Cemetery. Condolences may be sent to the family at www.warenski.com
Published in Deseret News on January 22, 2012
Posted by Unknown at 8:13 PM