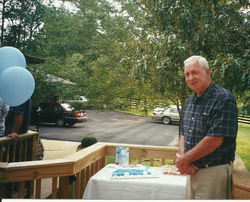 To view the online obituary please visit the funeral home at
http://www.cogginsfuneralhome.com/    or
http://thomastontimes.com/bookmark/16710540-Douglas-Calvin-Lane

Mr. Lane was born on July 29, 1937 in Meriwether County Ga, to the
late Walter and Essie Lane. He was a Northwest Pilot for 31 years. Mr.
Lane was a member of The Church of Christ.

Funeral Services will be held on Saturday December 10, 2011 at 11:00
a.m. from the Chapel of Coggins Funeral Home. Burial will follow in
Upson Memorial Gardens. The family will receive friends at the funeral
home on Friday December 9, 2011 from 5-7 p.m.

In lieu of flowers the family has requested that donations be made to
The Parkison Foundation, North Church Street Church of Christ or
Thomaston Hospice.

Coggins Funeral Home is in charge of arrangements.
Posted by Unknown at 9:04 PM