Word has been received of the passing of WWII and Korean War veteran, C&S/DL pilot and Delta Golden Wings member Captain Robert F. ‘Bob’ Little, age 92.  Captain Little hired on with Chicago & Southern Airways 11-01-1945 and retired with Delta at the mandatory age 60 in 1979, based ATL.
To view/sign the online guestbook please visit the funeral home website at  http://www.johnson-williamsfuneralhome.com/obituaries.aspx
Survived by his wife Jane Latta Little personal condolences may be
sent to the family at
846 Granger Circle , Dyersburg, TN 38024-3035  ...  (731) 286-5310
Thank you,
Carol 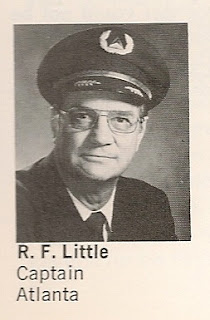 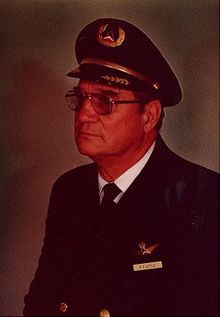 Robert F. "Bob" Little, 92 of Dyersburg, Tennessee died on Monday, May 21, 2012 at his residence.  Born Saturday, November 8, 1919 in Hoisington, Kansas, he was the son of the late Robert Clyde Little and the late Effie F. Little.
Robert F. "Bob" Little was a B-17 pilot in the U.S. Army Air Corps during World War II. Attached to the 23rd Bomb Squadron, 5th Bomb Group where he flew 72 missions in the Pacific before coming to the Dyersburg Army Air Base in November, 1943. He was an instructor for the B-17 crews at the base until it closed in 1945.
"Bob" served on the Board of The Dyersburg Army Air Base Memorial Association from 1997-2006 when he became a member of the Honorary Board. He was a dedicated docent, avid Museum supporter, and invaluable resource for visitors who cherished their talks with him about his experiences.
Mr. Little started his commercial pilot career with Chicago & Southern Airlines who merged with Delta Airlines on May 1, 1953. When Mr. Little retired from Delta Airlines, in 1979, he held the title of International Captain.
He was the Command Pilot for the final flight of the famed B-17, The Memphis Bell, from Altus, Oklahoma to Memphis, Tennessee on June 15, 1946.
From April, 1951 until 1953, Mr. Little's Tennessee National Guard Unit, the 155th Fighter Squadron was reactivated for service during the Korean War. In 1963 he retired from the military reserve with the rank of Lt. Colonel.
Mr. Little was a member of the Dyersburg Cumberland Presbyterian Church and an avid collector of watches and clocks. He was also a past board member of the National Association of Watch and Clock Collectors
Memorial services will be 7:00 PM Thursday, May 24, 2012 at the Cumberland Presbyterian Church in Dyersburg, Tennessee. Officiating this service will be Rev. Larry Blakeburn.
Visitation will be from 5:30 PM until 7:00 PM at the Cumberland Presbyterian Church in Dyersburg, Tennessee.
He leaves his wife of 67 years, Jane Latta Little of Dyersburg, Tennessee. He was preceded in death by a sister, Roberta L. Stewart.
Memorials may be made to the charity of the Donor's Choice.
Online condolences may be made to the family at johnson-williamsfuneralhome.com
From: THFoster6@aol.com    Sent: Tuesday, May 22, 2012 1:09 PM
Subject: Passing of Capt. Bob Little